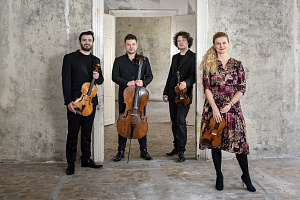 The Pavel Haas Quartet was founded in 2002 by Veronika Jarůšková and the violist Pavel Nikl, who left the quartet in 2016 but makes regular guest appearances to perform string quintets. The quartet members studied under the legendary violist of the Smetana Quartet Milan Škampa. After victories at the Prague Spring Competition and the Premio Paolo Borciani Reggio Emilia in Italy in 2005, the Pavel Haas Quartet quickly established itself as one of today’s most prominent chambre music ensembles, and it appears at the world’s most important concert venues. In 2007, the European Concert Hall Organisation (ECHO) chose the ensemble as one of its Rising Stars and gave the quartet the unique opportunity of presenting itself at a series of concerts at important halls around the world. From 2007 to 2009 the ensemble took part in the BBC New Generation Artists programme, and in 2010 it earned a special stipend from the Borletti–Buitoni Trust.

The Pavel Haas Quartet records exclusively for the Supraphon label. The ensemble’s re­cordings include major works of the repertoire by Czech composers (Leoš Janáček, Pavel Haas, Antonín Dvořák, Bedřich Smetana) and foreign authors (Sergei Prokofiev, Franz Schubert, Dmitri Shostakovich), and in both areas they have won top international awards. For the eight albums released so far, the ensemble has earned the Gramophone Award six times (their recording of the Dvořák quartets was honoured as “Recording of the Year”), the BBC Music Magazine Award twice, in one case the Diapason d’Or de l’Année, and countless acknowledgements in review columns of prestigious media around the world. For the Franz Schubert recording, the guest cellist is Danjulo Ishizaka. The new album of the quintets of Johannes Brahms ties in with the recording of Antonín Dvořák’s quintets, when the Pavel Haas Quartet repeatedly invited the pianist Boris Giltburg and the violist Pavel Nikl to collaborate with them.

The quartet bears the name of the Czech composer Pavel Haas (1899–1944), Janáček’s most talented pupil, who was imprisoned in the Theresienstadt ghetto in 1941 by the Nazis and was later murdered at the Auschwitz concentration camp. His musical legacy includes three splendid string quartets.