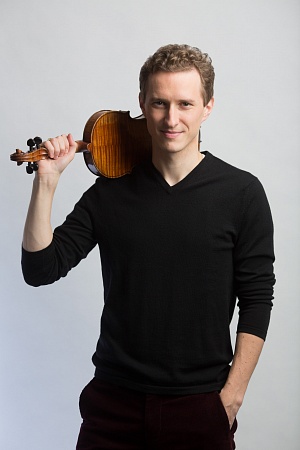 Josef Špaček is fast emerging as one of the most accomplished violinists of his generation. He studied with Itzhak Perlman at The Juilliard School in New York, Ida Kavafian and Jaime Laredo at the Curtis Institute of Music in Philadelphia, and with Jaroslav Foltýn at the Prague Conservatory. He was laureate of the International Queen Elisabeth Competition in Brussels, and won top prizes at the Michael Hill International Violin Competition in New Zealand, the Carl Nielsen International Violin Competition in Denmark and the Young Concert Artists International Auditions in New York.
Future highlights include return visits to the Orchestra Sinfonica Nazionale della RAI Torino and James Conlon and the Netherlands Philharmonic Orchestra and Marc Albrecht, as well as debuts with the Orchestre Philharmonique de Monte-Carlo and Tomáš Netopil, the Orchestre Philharmonique du Capitole de Toulouse and Thomas Søndergård, the Orchestre Philharmonique de Strasbourg, the Stavanger Symphony Orchestra and Christian Vasquez, the Sønderjylland Symphony Orchestra and Johannes Wildner and the Symfonieorkest Vlaanderen and Adrien Perruchon. He continues to appear as soloist of the Czech Philharmonic Orchestra for concerts conducted by Semyon Bychkov and Jiří Bělohlávek.
Highlights in 2016 included subscription concerts with the Czech Philharmonic Orchestra and Valery Gergiev, his debut with the Rotterdam Philharmonic Orchestra and Jiří Bělohlávek, his Berlin debut with the Konzerthausor­chester Berlin and Thomas Sanderling, his Amsterdam Concertgebouw debut with the Netherlands Philharmonic Orchestra and Thomas Søndergård, his Tokyo debut with the Tokyo Metropolitan Symphony Orchestra and Jakub Hrůša and the Orchestra di Padova e del Veneto and Gerard Korsten, as well as recital debuts in among others Kennedy Center in Washington D.C. and La Jolla, San Diego. He also was the soloist of the Czech Philharmonic Orchestra and Jiří Bělohlávek during their Asia tour.
Josef Špaček has served as concertmaster of the Czech Philharmonic Orchestra, the youngest in its history. The orchestra has named him “Associate Artist” as of January 2016.
In addition to the aforementioned orchestras, Josef Špaček makes solo appearances with orchestras across Europe, the US and Asia, such as the Philadelphia Orchestra, Prague Philharmonia, Orchestre Philharmonique du Luxembourg, Essener Philharmoniker, Tonkünstleror­chester Niederösterreich, Orchestra Sinfonica Nazionale della RAI Torino, Orchestre National de Belgique, Malaysian Philharmonic Orchestra, Orquesta Filarmónica de Málaga, Auckland Philharmonia Orchestra, Kansas City Symphony and Queensland Symphony Orchestra.
He collaborates with conductors such as Jiří Bělohlávek, Jakub Hrůša, Valery Gergiev, Christoph Eschenbach, Manfred Honeck, Semyon Bychkov, Asher Fisch, Roy Goodman, Eliahu Inbal, Jun Märkl, Thomas Søndergård, Thomas Sanderling, Giordano Bellincampi, Tomáš Netopil, Marco Angius and Rossen Milanov.
Josef Špaček gives numerous recitals in Europe (including at the Rudolfinum in Prague, the Konzerthaus in Vienna and at Schloß Elmau), Asia and the USA (among others at the Kennedy Center, Washington D.C. and La Jolla, San Diego).
April 2015 saw the Supraphon CD release of his highly praised recording of the violin concertos of Dvořák and Janáček, and of the Fantasy of Suk, with the Czech Philharmonic Orchestra conducted by Jiří Bělohlávek (among others “Recording of the week” of The Sunday Times, “Recording of the month and of the year” of MusicWeb International and 5* in Diapason). In 2013 Supraphon released his recording of works for violin and piano by Smetana, Janáček and Prokofiev with pianist Miroslav Sekera. In 2010 he recorded works by H.W. Ernst for Naxos. His first CD, which was released in 2006, includes a complete recording of the Sonatas for Solo Violin by Eugène Ysaÿe.
Josef Špaček plays a violin made in 1855 in the workshop of Jean-Baptiste Vuillaume.