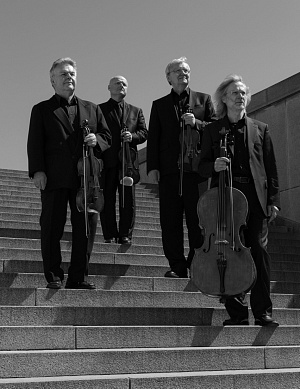 The Stamic Quartet was established in 1985 by four experienced performers – Bohuslav Matoušek, Josef Kekula, Jan Pěruška and Vladimír Leixner – and was a success right from its very start. The following year the ensemble won the Czech Chamber Music Society prize, and soon afterwards in Switzerland it made its first recordings. During that same period the ensemble also won a quartet competition organized by European radio stations in Salzburg (1986), which led to appearances in concert halls throughout the world. The quartet has performed in London (the Queen Elizabeth Hall), Rome (Santa Cecilia), Zurich (Tonhalle), Washington (the Kennedy Center), New York (the Metropolitan Museum), Tokyo (the Tsuda Hall) and elsewhere. It is a frequent guest at the most prestigious festivals, including, of course, the Prague Spring festival. The ensemble has a broad repertoire that incorporates works from the very earliest years of string quartet history right up to the most progressive works in contemporary quartet writing.
The Stamic Quartet very much enjoys reviving forgotten Czech works of the Classical period. In recent years it has learnt and performed quartets by several Czech composers living and working in Vienna at that time, including Jan Křtitel Vaňhal, Pavel Vranický and Leopold Koželuh. As regards the music of Pavel Vranický, the ensemble’s members also work as specialist consultants in the publication of the composer’s string quartet works. Among their highly acclaimed recordings are complete sets of the string quartets of Josef Bohuslav Foerster and especially the quartets of Sofia Gubaidulina. The Stamic Quartet’s current line-up with the first violinist Jindřich Pazdera and the cellist Petr Hejný, who replaced the prematurely deceased Vladimír Leixner, links up in all respects to the ensemble’s finest traditions – original sound, extensive repertoire, as well as high artistic quality.