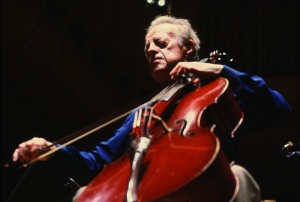 Navarra began taking voice and cello lessons at the age of seven. After completing his studies at the Conservatoires in Toulouse and Paris, in 1929 he joined the Krettly Quartet, with which he performed until 1936. In 1933, he became principal cellist of the Paris Opéra Orchestra. In 1937, at the age of 26, he won first prize at the prestigious Vienna International Competition. His promising career was, however, brought to an abrupt halt by the outbreak of World War II, during which he abandoned the cello and served with the French Infantry. In 1949, he was appointed a professor at the Conservatoire de Paris; from 1954 to 1988, he led summer cello master classes in Siena; he gave lessons at the Hochschule für Musik in Detmold, taught in Skopje and elsewhere. Besides Yugoslavia, the Eastern bloc country Navarra most often visited was Czechoslovakia. He performed on concert stages and at festivals in Prague and other cities (including Brno and Ostrava in the 1960s). His second home was Italy, where in 1988 he died in Siena at the age of 76.

Navarra's dis­cography is extensive indeed. His earliest recordings, dating from the 1940s, were released by France's Dante, followed in the 1950s by albums made for Calliope and Capitol. A truly exquisite Navarra collection was made by the Czechoslovak label Supraphon, for which between 1953 and 1966 the cellist recorded some 14 discs, mainly linked with his guest performances with the Czech Philharmonic and at the Prague Spring.