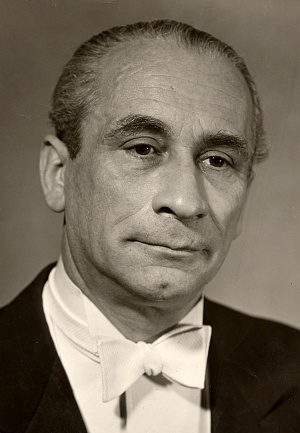 Karel Ančerl was born on 11 April 1908 in the village of Tučapy near Soběslav into a family that, although very cultured, had no musical background or tradition. He nevertheless learned the violin and thanks to an innate diligence and determination was already playing in the local orchestra at the age of eleven. He later began learning the piano while attending a grammar school in Prague, where he actively took part in music-making and exhibited an exceptional ability for organisation. Against the will of his parents, he joined the conservatory, where he studied composition with Jaroslav Křička, conducting with Pavel Dědeček and percussion. Of great importance for the next part of his artistic career were studies in micro-intervalic music with Alois Hába and, above all, his regular participation in rehearsals with the Czech Philharmonic, where he could observe the work of Václav Talich and a number of leading foreign conductors. When he himself came to the conductor’s lectern of this orchestra on 24 June 1930 so as to perform his own sinfonietta as part of his graduation, he displayed a remarkable erudition of which the critics of the time took particular note.

At a crossroads in his life the young artist decided on a career as a conductor. He soon drew attention to himself abroad when he overcame huge interpretational and organisational difficulties while rehearsing for Hermann Scherchen Alois Hába’s quarter-tone opera Mother, which he himself was to conduct 16 years later as the artistic director of the Opera of the Fifth of May in Prague. It was Jaroslav Ježek who helped him emerge from his financial insecurity when in 1931 he engaged him as conductor of the Liberated Theatre. Ančerl quickly proved himself by immediately raising the artistic standards of the ensemble. His early success was not limited to his native country, however: he received exceptional reviews for his concerts for the ISCM festival in Vienna (1932) and Amsterdam (1933), with his concerts in Strasbourg receiving critical acclaim too. Yet when he was finally engaged by Radiojournal (the erstwhile name of Czech Radio), he was entrusted at first with production work only and substitute conducting in times of need. On one such occasion, when he could be asked on any day to take over rehearsals of the unusually difficult third symphony by Sergei Prokofiev, he gained so much admiration that he was duly invited to conduct the Czech Philharmonic. It was at this time that he was also invited to Barcelona to another festival of the ISCM. Ančerl stood on the threshold of a great artistic career at the time the war fatefully affected his life. Following the occupation of the republic, he was immediately released from his position and on 12 November he was transported to Terezín, where he took part in the well-known music-making there, which took place in unbelievable circumstances. After two years he was transported to Auschwitz, where he lost his family but miraculously survived.

Following the end of the war he was named artistic director of the new Opera of the Fifth of May and over the course of half a year studied six lengthy operas. From 1 September 1947, however, he was back once again as an employee of the national radio, this time as chief conductor of the symphony orchestra. From 1948 he taught conducting for a short period at AMU (Academy of Musical Arts), and two of his students, Zdeněk Košler and Martin Turnovský, were awarded prizes at the prestigious competitions in Besancon.

The greatest period of Karel Ančerl’s artistic activity began on 20 October 1950, when he was named artistic director of the Czech Philharmonic. At first, the orchestra received him with some hesitation, but the members gradually adjusted to Ančerl’s intensive work schedule and high artistic demands; once the orchestra began to receive success abroad, he was accepted into its ranks for eighteen years and led the ensemble to international fame. Ančerl expanded the repertory with the works of twentieth-century classics (Schönberg, Bartók, Stravinsky, Prokofiev, Britten, etc.) and he dedicated himself to the works of Bohuslav Martinů at a time when there was little interest at home in this Czech composer living in exile. He led the Czech Philharmonic on an extensive tour taking in Australia, New Zealand, China, India and Japan (1959), and later the US and Canada; he led concerts with the ensemble in a number of European countries and was himself ever more frequently invited to conduct with the most important international orchestras. If we take a close look at the programmes of these engagements, we cannot fail to see how frequently he performed the works of Czech composers and how he consciously championed Czech music.

The revolutionary invention of the long-playing record during the 1950s and the perfecting of recording technology at the time brought an incredible expansion to the orchestra’s re­cording activities. Ančerl’s recor­dings, inspired by musicianship, were soon to gain recognition with prestigious international gramophone awards; their re-editions on CD still dazzle listeners today with their technical perfection and exquisite sound quality.

There is no doubt that, thanks to Karel Ančerl, the Czech Philharmonic could number itself among the very finest international orchestras and became a first-rate export article. Thus all the more painful for the orchestra was the chief conductor’s de­cision to emigrate after the events of 1968. In the following years, he nevertheless conducted two Prague Spring concerts (with the total number of his concerts with the Czech Philharmonic reaching 766), but he was to never return thereafter. He was to become the chief conductor of the Toronto Symphony Orchestra, and he also travelled as a sought-out and universally honoured artist to other North American orchestras, where he programmed the music of the Czech classics and the modern repertory. The afflictions he had suffered during the war finally began to take a toll on his health, and with the accumulation of family concerns he was unable to enjoy life very much in a free society. He died on 3 July 1973.

Without underestimating the enormous artistic debt of Václav Talich and Rafael Kubelík towards the creation of the basic aesthetic character of the Czech Philharmonic, we can safely say that Karel Ančerl was its first conductor of international repute and that he led the orchestra to masterful virtuosity and worldwide fame. His artistic performances were a synthesis of perfectly calculated conception and painstaking work with detail; they were founded on a perfect knowledge of the score, an ability to grasp a work’s construc­tion, a sophisticated characteristic feeling, a great concept for sound, and a perfectly understandable conducting gesture. Ančerl brought the finest artists to the orchestra, he worked with them systematically and was able to convince the orchestra of the correctness of his conception – perhaps the most important condition for artistic success in this field.