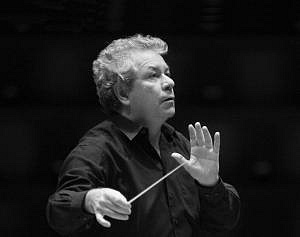 Renowned Czech conductor Jiří Bělohlávek was appointed Music Director and Artistic Director of the Czech Philharmonic in 2012, following on from his successful tenure as Chief Conductor of the BBC Symphony Orchestra, of which he is now a Conductor Laureate. He was Chief Conductor of the Prague Symphony Orchestra (1977–89), Music Director of the Prague Philharmonia (1994–2004), was appointed President of the Prague Spring Festival in 2006. In 2013 he took on the role of Principal Guest Conductor of the Rotterdam Philharmonic Orchestra. In opera, he has collaborated with the Royal Opera, Covent Garden, New York’s Metropolitan Opera, San Francisco Opera, Opéra National de Paris, the Teatro Real, Madrid, Glyndebourne Festival Opera, and the National Theatre in Prague, and in recent seasons he has conducted new productions of Rusalka for the Vienna State Opera and The Queen of Spades for Zurich Opera.

Under his leadership the Czech Philharmonic has toured Europe and Asia, and will be heard in the coming seasons in Vienna for a residencies at the Musikverein and on tour in the music capitals of Europe from Budapest to Paris and London, across the USA, including at Carnegie Hall, New York and the major cities of Asia, from Tokyo and Seoul to Taipei and Beijig.

In addition to his ongoing Prague seasons and touring engagements with the Czech Philharmonic, he continues to perform as a guest conductor with the world’s major orchestras, with highlights including appearances with the Boston Symphony, New York Philharmonic, BBC Symphony Orchestra (including at the London Proms), Pittsburgh Symphony, Washington National Symphony, and Deutsches Symphony Berlin, Leipzig Gewandhaus Orchestra. Jiří Bělohlávek has recorded extensively, with recent projects with the Czech Philharmonic including the complete symphonies and concertos of Dvořák.

In 2012 he was awarded an honorary CBE for his services to British music.