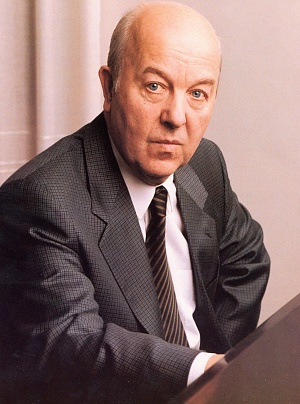 Ivan Moravec (9 November 1930, Prague – 27 July 2015, Prague) was – along with Rudolf Firkušný – the most celebrated 20th–century Czech pianist. He studied at the Prague Conservatory and the
Music Faculty of the Academy of Performing Arts in Prague, and further honed his artistry and skills at masterclasses led by Arturo Benedetti Michelangeli (1957, 1958). In the wake of his acclaimed debut in London with av solo recital at Wigmore Hall, followed by a superb performance at the Royal Festival Hall of Prokofiev’s Piano Concerto No. 1 with the Philharmonia Orchestra conducted by Gunnar Staern, in 1962 he was invited to make his first records for the US’s Connoisseur Society.

Ivan Moravec’s artistry is captured on multiple recordings for the Connoisseur Society, Supraphon, Nonesuch, Dorian, Vox and Hänssler Classics. A number of his albums were critically acclaimed and nominated for the Grammy Award. Selected recordings were included in the Philips Records “Great Pianists of the 20th Century” anthology. Ivan Moravec was also a distinguished educator. He taught at the Academy of Performing Arts in Prague (1969–2014), where his most gifted pupils included Jaroslava Pěchočová and Jan Bartoš, and nurtured at masterclasses young musicians from all over the world.

Along with the major pianists of his time (R. Firkušný, E. Gilels, M. Uchida, L. Fleischer, etc.), Moravec sat on juries of a number of international competitions, among them the most challenging and prestigious one, the Queen Elisabeth Competition in Brussels (1978, 1983, 1987), as well as competitions in Leeds, Vienna and Washington.

In 2000, President Václav Havel presented Ivan Moravec with the Medal of Merit for outstanding artistic achievement, and Charles University awarded him the coveted international Charles IV Prize. In 2002 he received at MIDEM the Cannes Classical Award, and in 2004 he was granted the Czech Music Council Prize for lifetime achievement and promotion of Czech music.