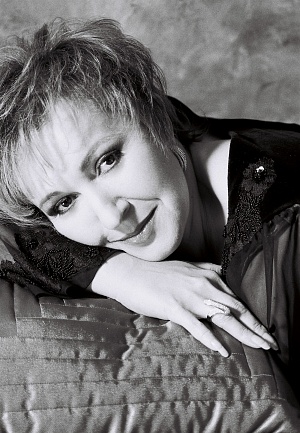 Eva Urbanová studied voice privately under professor Ludmila Kotnauerová at the very beginning of her career; today she works regularly with the legendary singer Renata Scott. She began her career in 1987 as a soloist of the J. K. Tyl Theater in Plzeň, and appeared not long afterwards at the National Theater in Prague in the role of Milada in a production of Smetana’s Dalibor conducted by Zdeněk Košler. She has been a soloist of the National Theater Opera since 1990. She earned the admiration of the audience and respect of the critics for her performance in the title role of Dvořák’s oratorio Saint Ludmila accompanied by Gerd Albrecht conducting the Czech Philharmonic during the 1991 Prague Spring festival. In 1994 she made her American and Japanese debuts and appeared at the Zurich Opera for the first time in the role of Puccini’s Suor Angelica.
1997 was a particularly successful year whose triumphs included performances of Dvořák’s oratorio Stabat Mater in Montevideo and Buenos Aires, her La Scala debut in Ponchielli’s La Gioconda with José Cura, and a major success at the National Theater in Prague in the role of Kostelnička in Janáček’s Jenufa. She was wildly applauded in Vienna for her part in Janáček’s Gla­golitic Mass with the Vienna Philharmonic conducted by Richard Chailly. She also performed the Glagolitic Mass in Britain and Canada, and later with conductor Sir Charles Mackerras in Prague on the occasion of the celebration of the 100th anniversary of the founding of the Czech Philharmonic.
In March, 1998 she made her debut at New York’s Metropolitan Opera, singing the role of Ortruda in a new production of Wagner’s Lohengrin conducted by James Levin and directed by Robert Wilson, returning to the Met in the following years to sing roles such as Tosca (in a production by conductor Nello Santi and director Franco Zeffirelli), Santuzza and the Foreign Princess in Rusalka.
In January, 1999 Urbanová returned to the role of Milada in a production of Dalibor at Teatro Lirico di Cagliari (with conductor Yoram David and director Jiří Menzel). A concert tour with conductor Richard Bradshaw followed, in which she presented her Czech concert repertoire to audiences in the US and Canada. Further North American appearances that year included Leonora in Verdi’s Il Trovatore at the Canadian Opera in March, 1999 and the title role in La Gioconda (conducted by Willie Anthony Waters and directed by Bernard Uzan) at the Montreal Opera in May and June. During the following year she appeared on Gran Canaria the following year as the soprano soloist in the Glagolitic Mass, performed at a gala concert in Hong Kong, and also dazzled audiences there as Kostelnička in a guest performance by the National Theater Opera and conductor Jiří Bělohlávek. It was as Kostelnička that she also thrilled audiences in Lisbon and Washington, where her performance in a concert version of Jenufa was a veritable triumph, and in 2002 she received the prestigious Canadian Dora Mavor Moore award for her exceptional interpretation of this role. She also brought her interpretation of the soprano solo part in the Stabat Mater to the American continent (Carnegie Hall, New York), and her guest appearance as Gioconda at the German Opera in Berlin was another major success. Other roles in which she has excelled include the title role in Libuse by Smetana (first performed in Edinburgh), the Foreign Princess in Rusalka by Dvořák (Zurich, Opéra Bastille, Covent Garden), the Mother in Fate by Janáček (Madrid), and Turandot by Puccini (Cinncinatti, Jamburg, the Volksoper in Vienna). She also earned the respect of audiences with her Minnie in Puccini’s The Girl of the Golden West at the National Theater in Prague in 2007 (conducted by John Fiore and directed by Jiří Nekvasil).
Urbanová has made a number of exclusive recordings for Supraphon, including Dvořák’s Libuse (Libuse) and Dalibor (Milada) conducted by Zdeněk Košler, and Janáček’s Šárka (Šárka) conducted by Sir Charles Mackerras, a recording for which she was nominated for a Gramophone Award at the end of 2001, and which was nominated for two Grammy Awards in two categories in January, 2002. Other exclusive recordings for Supraphon include the soprano solos from Dvořák’s oratorio Stabat Mater and cantata The Wedding Shirt (conducted by Jiří Bělohlávek). Her discography also includes the CD’s Celeste Aida with famous arias from the international opera literature, Famous Czech Opera Duets and Italian Opera Arias.