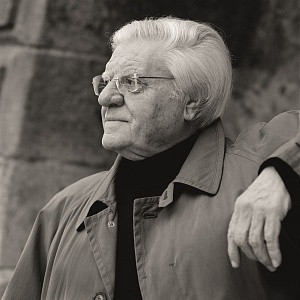 The name of Josef Suk has been indelibly associated with the line marking the evolution of Czech interpretive art over the last half century. He has developped the creative legacy of his eminent teachers, including most notably Jaroslav Kocian, as well as the bequest of his own grandfather, the composer Josef Suk, among other things a long-time member of the legendary Czech Quartet.
From the very inception of his career as a soloist, Josef Suk has never ceased to couple it with systematic work with various chamber music formations: briefly as the leader of the Prague Quartet (1950 – ´52), and for many years as the founder and member of the Suk Trio, formed in 1951. In 1961 he was named soloist of the Czech Philharmonic Orchestra. Throughout his career he has likewise shown a very special affinity towards another string instrument, the viola, which also used to be an instrument played by his great-grandfather, Antonín Dvořák. In 1981 he became artistic director and conductor of the Suk Chamber Orchestra.
In the course of his career, Maestro Suk has made many recordings for companies in his home country, including Supraphon, Panton and Lotos, as well as for major international labels, such as Decca, EMI, Erato, Columbia, Agricola, Koch and others. His discs have earned him an impressive array of prestigious awards: Grand Prix de l´Académie Charles Cros of Paris (for six titles, in various years); Edison Prize (the Netherlands, 1972); Wiener Flötenuhr (from Vienna´s Mozart Society, 1974), and many others.
He has to his credit a Golden Disc awarded by Columbia (1977); a Supraphon Golden Disc (1986); and a Platinum Disc received from Supraphon in 1999, for the aggregate sales of 1,112,000 copies of his recordings.
At various stages of his career Josef Suk was active as a teacher of violin at Vienna´s Hochschule für Musik und Darstellende Kunst, as well as being a member of different international competition juries. He has devoted a good deal of time and energies to work in several foundations, including most prominently the Dvořák Foundation for Young Performing Artists in Prague. Last but not least, he is the current President and Chairman of Artistic Board of the Prague Spring International Music Festival.