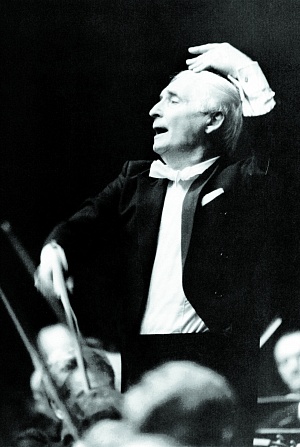 Václav Neumann (1920–1995), a distinguished Czech conductor and unforgettably charismatic music director of the Czech Philharmonic Orchestra, made the highest number of discs of any artist, irrespective of profession, for Supraphon. They above all include complete sets and individual recordings of major works, with many of them having received the world’s most prestigious awards, as well as minor, generally popular pieces. The present album comprises a large selection of the recordings Václav Neumann made before he assumed the post of principal conductor of the Czech Philharmonic, with most of them possessing a great historical value. And a number of the featured recordings are appearing on CD for the very first time.

Unlike many other famed conductors, by the time he became head of the Czech Philharmonic, Neumann was already an established artist of international renown. He started his professional career as a violinist (he studied at the Prague Conservatory with Josef Micka) and concurrently took conducting lessons (from Pavel Dědeček and Metod Doležil). While still a student, he initiated the establishment of the legendary Smetana Quartet, in which he initially played first violin and later on viola. Following the end of World War II, be became a violist of the Czech Philharmonic, which from 1942 to 1948 was led by Rafael Kubelík. Neumann, however, wanted above all to be a conductor and definitely decided to pursue this path in 1947, after leaving the Smetana Quartet. A watershed in his career came in March 1948, when he had to stand in for Kubelík, who had suddenly fallen ill. In the same year, Kubelík emigrated and Neumann took over the majority of his scheduled concerts, conducting performances in Prague and other cities in Czechoslovakia. He led the Czech Philharmonic during its tour of East Germany and in 1949 conducted Smetana’s My Country at the opening concert of the Prague Spring music festival. Nevertheless, at the time he lacked sufficient experience to head as renowned an orchestra as the Czech Philharmonic and hence after a year left his post of chief conductor. From 1951 to 1954, Neumann served as music director of the Plzeň Radio Orchestra (today’s Plzeň Philharmonic), in 1954 he became conductor of the Brno Region Symphony Orchestra, which two years later he merged with the Brno Radio Symphony Orchestra, thus giving rise to the Brno State Philharmonic. Subsequently, he joined the Prague Symphony Orchestra, with whom he made his debut at the Komische Oper in Berlin. In 1957, he was appointed its chief conductor.