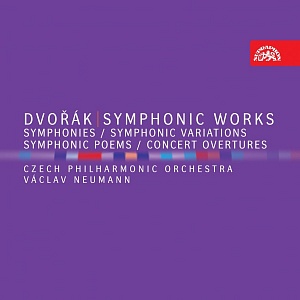 Few other composers' music enjoys such enormous popularity and is as frequently performed on stages worldwide and recorded as that of Antonín Dvořák. And it is the symphonic works that are connected with his name most often. The new Supraphon eight-disc box features several complete sets and encompasses Dvořák's most significant symphonic pieces. Alongside the Symphonic Poems and Concert Overtures, Supraphon is releasing for the first time on CD Václav Neumann's sensitively remastered 1972-74 analogue recordings of the complete symphonies (until now, only the digital recordings from the 1980s had been released on CD). Václav Neumann linked up to the Czech Philharmonic Orchestra's bold Dvořák tradition in the wake of his illustrious predecessors Václav Talich and Karel Ančerl and developed it in sonic colourfulness and romantic sweep. Following two complete sets of chamber works (the Panocha Quartet etc., SU 3815-2, SU 3921-2) and the complete essential piano pieces (Radoslav Kvapil, SU 4018-2), you can now add to your music library another of the "worlds" of Dvořák's amazing oeuvre, in a highly acclaimed interpretation with the seal of the Czech Dvořák tradition.

”The Symphonic Variations are an outstanding display of musical and orchestral finesse. In the Symphonic Poems Neumann is able to combine Talich’s symphonic strength with Chalabala’s story-telling gifts…[the set] demonstrates that the Neumann era did not bring about a decline in either Dvor(ák interpretation in Prague or in the standards of the Czech PO, which is magnificent throughout.”
MusicWeb International, December 2012

”This is a set that no one who cares about Dvorák’s symphonies can afford to ignore. Even if you have the versions just mentioned, these performances really do belong in every serious collection.”
ClassicsToday.com, January 2018