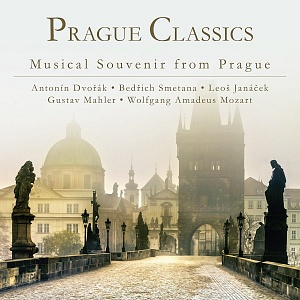 Originally, ARTONA was a sublabel of the ULTRAPHON gramophone company, predecessor of today's SUPRAPHON publishing house. For the first time this label appeared in the spring of 1932 bearing the supplementary characteristics of "local product". The main reason for establishing the side label was Ultraphon's effort to come up with recordings that might appeal to the general public both by their contents and price. Supraphon now re-introduces this sublabel with the aim of publishing compilations that will please the lovers of the most famous and popular melodies offered by classical music.

A Musical Souvenir from Prague
Experience the magic atmosphere of Prague through the works of classical music written by composers who were in one way or other connected with Prague. We offer you here a musical walkthrough with Antonín Dvořák, Bedřich Smetana, Leoš Janáček, Wolfgang Amadeus Mozart and Gustav Mahler as well as leading Czech orchestras and ensembles. Quite rightly, Prague is considered to be one of most beautiful European cities. Its monuments including the Prague Castle, the Charles Bridge, the astronomical clock of the Old Town City Hall or the Old Jewish Cemetery make the "golden city" one of the most frequently visited tourist destinations in Europe. Prague's unique charm also attracts artists from all over the world and its "genius loci" has inspired a number of composers both locally and internationally.
Allow the city and its music to charm you too!