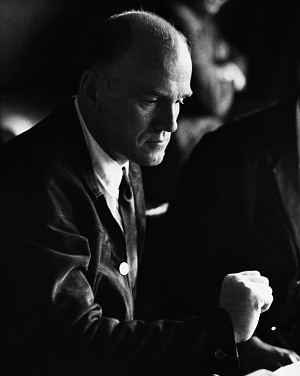 Every encounter with Sviatoslav Richter, one of the greatest artistic personalities of the modern era, yields new surprises for the listener. This colossus among 20th-century pianists possessed the soul of a discoverer. Where did this groundbreaking, multi-faceted, cultivated, self-confident and concurrently extremely shy performer/creator emerge from? An artist whose musical messages are so powerful that – in the words of Leonid Kogan – they lose the feeling of any material tangibility and retain the impression of intangible spirituality? What was the path in life of the pianist during whose performances we completely forget to perceive the actual phenomenon of piano technique as such and begin reading every work like an open book?
Richter was born on 20 March 1915 in the Ukrainian city of Zhitomir into the family of an organist and a piano teacher of German-Polish origin. He gained his basic education at the German school in Odessa, but did not have the chance to enjoy a proper family life: soon after the outbreak of the war his father fell victim to persecution by the regime and his mother (who later on married the accomplice (!) to her husband’s unclear death who, to boot, cynically assumed the surname of the murdered) left Odessa during the war and settled in Germany. This notwithstanding, Richter recalled his childhood with tenderness, as he also affectionately recollected the prolific musical background of Odessa, where he worked as a répétiteur and where he also gave his first piano recital. Despite the fact that following his arrival in Moscow (1937) he could not present a graduation certificate from any music school, he was immediately accepted into the Conservatory class of the renowned Heinrich Neuhaus, which he officially completed in 1947, already an acknowledged concert artist with an impressive repertoire, extending month by month at an incredible pace. He possessed the extraordinary ability to play from a sheet, a source of genuine envy on the part of other musicians. He practised five to eight hours a day; even after an exhausting concert he was able to sit down at the piano and explore a new work all night long.
Richter didn’t make his first foreign tour until 1950, one that included a performance at the Prague Spring festival. In May 1960 his concert diary included the first performance in a Western country – Finland. In the same year, he gave 26 concert performances in the USA and Canada, crowned by triumphant concerts at New York’s prestigious Carnegie Hall. Already at the time, a special feature appeared in the pianist’s concert activity – the compulsion to hold recitals beyond traditional musical centres, often in quite obscure places. In 1964, owing to Richter a music festival originated in the small French village of Meslay. Richter adored France and spent some thirty holidays in the country.
While at the peak of his creative powers, chamber music too began to play a significant role in the pianist’s life. Previously a devoted stage accompanist to his partner, the singer Nina Dorliak, he started to co-operate with Dietrich Fischer-Dieskau, David Oistrakh and many other instrumentalists. Following an unpleasant lapse of memory, in 1980 he changed the form of his performances, playing exclusively with his sheet music on the stand, in a darkened auditorium, with only a spotlight beam thrown on to the piano, thus forcing the listener to concentrate to the maximum and creating an atmosphere of sacred exceptionality. Richter’s final concert took place in Lübeck, Germany, in March 1995. He died in Moscow on 1 August 1997.