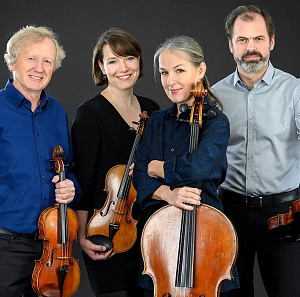 The Martinů Quartet (originally the Havlák Quartet) was formed at the Prague Conservatory by students of the chamber music class of V. Moučka, the cellist with the Vlach Quartet. Following their enrolment at the Academy of Performing Arts in Prague, they continued to pursue their activities under the guidance of A. Kohout, the cellist with the Smetana Quartet. The ensemble members further honed their skills at international master classes, led by the Amadeus Quartet, the Guarneri Quartet, the Juilliard String Quartet, etc. They have garnered seven laureate titles at prestigious quartet competitions (the ARD Munich, Evian, Portsmouth/London, the Prague Spring) and dazzled audiences at prominent concert venues worldwide. Their extensive discography primarily includes albums featuring Czech music (Martinů, Dvořák, Janáček). In 2004, the ensemble received the MIDEM Classical Award in Cannes for their CD of Martinů’s quartets, which was named Recording of the Year in the chamber music/solo category. In 2015, their album of the complete Taneyev quintets met with great critical acclaim and won the CHOC de CLASSICA, with the magazine commenting on it: “Their performance of the piano quintet eclipsed the lauded accounts by Repin, Gringols, Imaï, Harell and Pletnev.” The Martinů Quartet have closely collaborated with Czech Radio, BBC, Radio France, ARD and ORF. They play instruments made by K. B. Dvořák, P. O. Špidlen, O. Erdesz and F. Gand. In 2017, the ensemble celebrated their 40th anniversary by performing at the Prague Spring festival and giving a concert held by the Czech Chamber Music Society. In 2017, the Czech music magazine HARMONIE wrote: “The ensemble is in top form and over the long term has been one of the best quartet performers.”