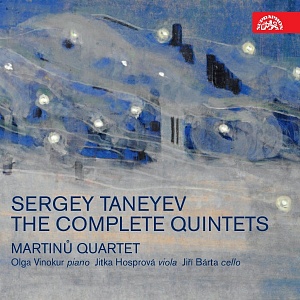 "Taneyev is one of the few with genuine promise - he will be a magnificent pianist and splendid composer," is how N. G. Rubinstein praised his pupil. When it comes to Taneyev's compositions, there is still plenty to discover. Born in Imperial Russia, at the age of 10 Taneyev enrolled at the Moscow Conservatory to study the piano (with Rubinstein) and composition (with Tchaikovsky). While in Paris, he made the acquaintance of Turgenev, Gounod, Flaubert, Saint-Saëns and other great artists. At the tender age of 28, he assumed the post of director of the Moscow Conservatory, where his pupils included Rachmaninoff, Scriabin and Gli?re. The detailed elaborateness of Taneyev's complex scores bears witness to his thorough exploration of Bach, Mozart and Beethoven works, and a sharp intellect that remarkably blends with bold emotionality in lyrical and dramatic areas. The wide colour spectrum has been rendered splendidly by the Martinů Quartet and their guests on a new recording of the complete Taneyev quintets - an album that serves as proof of the artist's position among the most distinguished European composers.

“[Taneyev] had a musical heart, often passionately expressed and with a dynamic, romantic impulse. Those are qualities that come across clearly in these performances: they have a strong backbone, but equally are alert to the lithe interplay between the five instruments to create substantial canvases in sound.“
The Daily Telegraph, 21st March 2015

“the artists have an exceptional understanding of what Taneyev is doing…very appealing work, sensitively understood and played“
Gramophone, May 2015

“The string quintets emerge as near-orchestral giants, hard to categorise…The finest performance here is undoubtedly the perfectly-integrated sound of piano (Olga Vinokur, superlative) and string quintets I can imagine performances running a greater gamut of dynamics. But a thousand thanks to the Martinus and their colleagues for enlightenment.“
BBC Music Magazine, June 2015

“Taneyev’s chamber works are cast on a big scale, infused with a nostalgic late-romanticism that is both winning and slightly cloying. The Martinu Quartet, however, makes the strongest possible case for them.“
Classical Music, January 2016