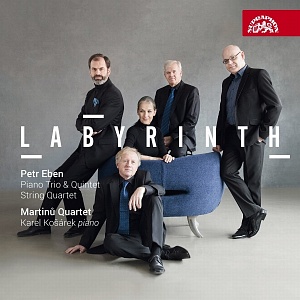 Eben: String Quartet "Labyrinth of the World and Paradise of the Heart", Piano Trio, Piano Quintet

Petr Eben was one of the most distinguished Czech composers of the second half of the 20th century. His music gained recognition far beyond the Iron Curtain and his homeland. Best known for organ and sacred works, his chamber pieces have - unjustly - been somewhat overlooked. Eben's music reflects his fascinating life story. At the age of 16, he was deported to the Buchenwald concentration camp, where he got to know the thin line between life and death. His harrowing experiences there resulted in an emboldening of his Christian faith, approach to people and art alike. Eben's "programme" is most evident in the String Quartet (1981), written to commission for the Smetana Quartet and inspired by the allegorical work "The Labyrinth of the World and the Paradise of the Heart" by the famous 17th-century Czech philosopher, educator and theologian Jan Amos Komenský, in whom he saw a model for viewing this world: "not to be attached to it, to retain a critical view and distance, yet to dedicate one's strengths with the aim to make it better and attain its redemption". Both the Piano Quintet (1992) and the Piano Trio (1986) clearly reveal their creator - Eben the superlative pianist. In them, the composer did not strive to make the instruments chime, opting instead for juxtaposing the sounds of the piano and the strings. The renowned Martinů Quartet (whose releases include the highly acclaimed CD of Sergey Taneyev's complete quintets, SU 4176-2) and the pianist Karel Košárek have undertaken Eben's quintet's premiere recording and the quartet's first modern-time recording since that made by the legendary Smetana Quartet.

“The Martinů Quartet and Karel Košárek deliver gripping and polished performances of these wonderfully compelling scores, and I would urge those with an interest in 20th Century chamber music to give them a try. The sound quality cannot be faulted, and instrumental balance is ideal, showcasing these works at their very best.”
MusicWeb International, September 2017

“The playing of the Martinů Quartet and its constituent members is excellent and in Karel Košárek they have a wonderful collaborator, theirs is an intelligent and well measured performance, one which enables the composer to speak through his music. The recorded sound is clear and well balanced and the booklet notes are informative. A most impressive release.”
MusicWeb International, October 2017

“This new Supraphon release, then, is particularly welcome, venturing beyond Eben’s more familiar organ music to showcase his equally affecting but relatively little-known chamber output… The Martinů Quartet give all three works the flexibility they demand, tracing their angular contours like a musical cardiogram. Meanwhile Karel Košárek does full justice to the capricious piano parts. There is real vigour and enthusiasm here, reminding us that this is not punishing contemporary music to be held at arm’s length, but simply music.”
Gramophone, October 2017

“Petr Eben’s chamber music works on this CD are heard in outstanding performances. The Martinů Quartet and pianist Karel Košárek play with real commitment and expertise. With a good recorded sound this release offers a fascinating view on the most important Czech composer of the second half of the 20th century.”
Pizzicato, November 2017