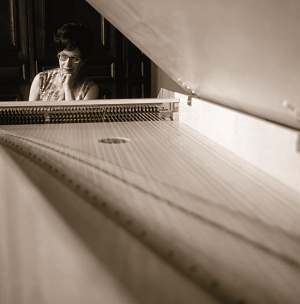 Born on 14 January 1927 in Plzeň, Zuzana Růžičková began playing the piano at the age of nine. In the wake of the breakout of World War II, she was excluded from the secondary school, owing to her Jewish descent. In January 1942, the Nazi authorities interned her and her family in the Terezín (Theresienstadt) ghetto-camp (where she encountered a number of imprisoned musicians), following which they were deported to Auschwitz and Bergen-Belsen. She was fortunate to survive, yet returned home ravaged by horrific experiences and overwhelmed by the feeling that nothing made sense in the world. After the war, she started to study music. “I had been engrossed by Bach ever since I was a child, and as he composed for the harpsichord I duly decided to learn how the play the instrument,” Zuzana Růžičková said years ago. Between 1947 and 1951, she attended the Academy of Performing Arts in Prague, and subsequently studied in Paris. In 1956, Zuzana Růžičková won the competition in Munich, which launched her illustrious decades-long career.
During the era of Communist rule in Czechoslovakia, she was fiercely criticised for championing a “feudal and religious” music, and initially she had to convince the concert promoters and audience that the harpsichord was an instrument worthy in its own right. At her concerts, she even used to perform the same compositions on the piano and then the harpsichord. With the violinist Josef Suk, Zuzana Růžičková travelled throughout Europe, visited Japan, Thailand, Australia, the USA and Canada. She was a regular and sought-after guest at prominent festivals. From 1979 to 1990, Zuzana Růžičková was a soloist of the Czech Philharmonic. Furthermore, she taught the piano and the harpsichord at the Academy of Performing Arts in Prague, yet only in the middle of the 1980s did she finally succeed in establishing harpsichord studies as a fully-fledged discipline. In 1990, she was named a professor. Zuzana Růžičková also taught at the Academy of Performing Arts in Bratislava and led master classes in Europe, including in Zurich, Stuttgart and Sofia, and in Japan.
In 1994, she received Hamburg’s Medal of Arts and Science; in 2011, she obtained Aachen’s Kultur­preis Karl IV. “It took me some time to muster up the courage to go to Germany. I was afraid that I would encounter some of my former torturers there, yet my love of Bach ultimately helped me to overcome my apprehensions,” Zuzana Růžičková recalled. She received numerous other accolades, including four Grands Prix du Disque Académie Charles Cros. In 2003, she was decorated with the honour of Chevalier des Arts et des Letters, and received the Medal of Merit from the Czech President.
Zuzana Růžičková recorded some 35 albums, featuring the complete harpsichord works of J. S. Bach. In June 2017, she was conferred a Platinum Disc from Supraphon. This May, the label re-released the complete Bach harpsichord concertos Zuzana Růžičková had recorded in 1968.