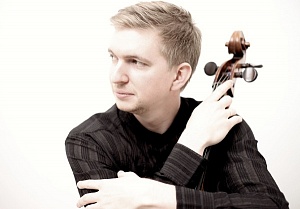 Tomáš Jamník (*1985, Prague) is a Czech cello player, residing in Berlin.
A celebrated soloist, Tomáš won the top prize in the Prague Spring International Music Competition in 2006, as well as being awarded a number of special prizes, including the Czech Radio prize, Oleg Podgorny prize, Gideon Klein Foundation prize, Pro Harmonia Mundi Foundation prize and the Artist’s Life Foundation prize. He was also a finalist at the Pierre Fourniere Award 2011 in London.
Tomáš has performed extensively with top international orchestras. In 2010 he made his debut with the Prague Philharmonia, performing Schumann’s Cello Concerto alongside conductor Jakub Hrůša. During the following seasons, he debuted with the Czech Philharmonic Orchestra (Eliahu Inbal, Schumann Cello Concerto) and performed as a soloist with orchestras in the U.S.A., Israel, Spain, Japan, and Germany. In recent seasons he appeared at the Styriarte festival in Graz, the Dresdner Musikfestspiele and the Prague Spring Festival. He has also toured with the Brno Philharmonic Orchestra and conductor Petr Vronský, performing the Dvořák Cello Concerto in B minor in Tokyo, Osaka, Matsumoto, Fukuoka, Okayama, and Musashino.
Season 2017/18 brings Tomáš to the newly opened Elbphilharmonie in Hamburg, where he will perform at the Czech it out! festival together with the Pavel Haas Quartet and the Dvořák Trio. Together with the Prague Philharmonia orchestra and conductor Jakub Hrůša Tomáš will prepare a special programme with the music of Bohuslav Martinů. Tomáš will also for the first time work with two top Moravian orchestras in Brno and Ostrava. With the Brno Philharmonic Orchestra he will perform Concerto No. 2 by Bohuslav Martinů in the NOSPR concert hall in Katowice, Poland. The highlight of the season will be a premiere of a work written for Tomáš by composer Jan Ryant Dřízal. The premiere will be held in May in Prague together with the Radio Orchestra Prague with conductor Marek Šedivý.
His debut album, recorded in 2007 for Supraphon with pianist Ivo Kahánek (works by Janáček, Martinů, Kabeláč) was hailed by the magazine Harmonie as “the Czech debut of the decade”. In 2008, another CD followed with works by Martinů, Sluka and Eben. In 2010 he recorded the complete works of Dvořák for cello and orchestra with the Prague Radio Symphony Orchestra and conductor Tomáš Netopil. This CD includes Dvořák’s little-known Concerto for Cello and Orchestra No. 1 in A major, which was recorded in a new version edited by Tomáš himself, using orchestrations by Jarmil Burghauser and the original version of the solo-cello score. Tomáš also has a keen interest in contemporary music, having recorded works by Czech composers including Ondřej Kukal, Slavomír Hořínka, Marko Ivanović and Luboš Sluka.
As a chamber musician he has performed with the Pavel Haas Quartet in Reggio Emilia in Italy and with mezzosoprano Magdalena Kožená in the Barbican Hall in London. He is also a founding member of the Dvořák Trio (with Ivo Kahánek – piano, Jan Fišer – violin).
Beside his classical career, Tomáš is promoting classical music to broader audiences. In 2016 he founded a project called Vážný zájem, which is popularizing classical music concerts in people’s homes. To date more than 200 ‘house concerts’ have been organised with hundreds of musicians involved. This success brought Tomáš to many stages, where he speaks about classical music, lately at TEDx Prague.
Tomáš Jamník began his musical training in the Czech Republic (teachers Mirko Škampa, Martin Škampa and Josef Chuchro) and in 2006 was awarded a place at the Hochschule für Musik und Theater in Leipzig under Prof. Peter Bruns. In 2010 he graduated from the Universität der Künste Berlin under Prof. Jens Peter Maintz and in the same year he was awarded a place in the celebrated Karajan Academy in Berlin. As part of the Academy he performed as a member of the Berlin Philharmonic, collaborated with other scholarship holders in chamber concerts, and took lessons with Ludwig Quandt, principal cellist of the orchestra. He has taken part in master classes given by Truls Mørk, Heinrich Schiff, Jiří Bárta and Gustav Rivinius, and at the summer academy in Kronberg, Germany he studied under Steven Isserlis, Siegfried Palm, Young-Chang Cho and Pieter Wispelwey. As of 2015 he is the artistic director of the Academy of Chamber Music in the Czech Republic, which cooperates with the German foundation Villa Musica.