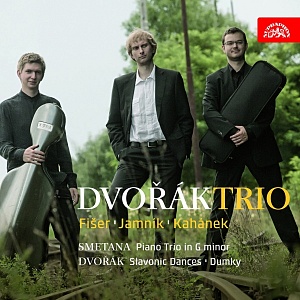 
Ivo Kahánek, Jan Fišer and Tomáš Jamník rank among the most distinct Czech musicians of their generation, both as soloists (concerts with the Czech Philharmonic, the Prague Philharmonia, the BBC Symphony Orchestra; CDs released by Supraphon) and chamber players. Under the name Trio Concertino, they started to perform under the guidance of Josef Chuchro (Suk Trio) and Ivan Klánský (Guarneri Trio). In accordance with the ensemble's new name, their debut recording primarily focuses on Dvořák. "I am now working on something small, tiny even… It will be merry and sad. In places, it will be like a wistful song, elsewhere like a lively dance, yet in a more lightsome style…" Dvořák, with his typical humility, wrote in a letter about his work on the Dumky, a masterpiece that has no parallel in trio literature. When Dvořák gave a great farewell tour of Bohemia and Moravia prior to his departure for America, in addition to the Dumky the repertoire also included the Slavonic Dances, arranged for a chamber performance. The emotional apex of this CD is Smetana's Trio in G minor, written in the wake of the death of the composer's infant daughter. The recording reveals the fundamental virtue of the young ensemble: a unique balance between spontaneous energy, performance experience and consistent well-considered delivery of the work.

“The Dvorak Trio bring drama to the craggy opening of Smetana's Trio…All in all, it's a fine reading of this remarkable work.“
BBC Music Magazine, July 2014