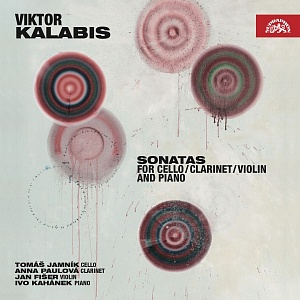 Viktor Kalabis (1923-2006), one of the most distinguished figures of 20th-century Czech music, wrote dozens of opuses, mainly instrumental pieces, including for his wife, the world-renowned harpsichordist Zuzana Růžičková. As he himself put it, his aim was to create music rooted in his country, music for educated listeners. Although he also drew inspiration from 20th-century classics, Kalabis arrived at a synthetic style of his own, an alternative to the rational compositional techniques - a Neo-Romantic alternative, akin to Neo-Classicism. Besides the first ever album of Kalabis's complete piano oeuvre (2 CDs, scheduled to be released in 2019), Ivo Kahánek and other leading Czech instrumentalists have recorded the composer's three sonatas. The one for cello reflects the dramatic events in Czechoslovakia between June and September 1968: the months of euphoria of the Prague Spring, followed by disillusionment and resignation in the wake of the Warsaw Pact's invasion, which for two decades to come would numb all hopes of freedom. The clarinet sonata (1969) too clearly refers to the time of its coming into being: drama, grief and sorrow, escalated into harrowing helplessness. The elliptical and coherent violin sonata (1982) places emphasis on the instrument's typical ethos - melodiousness, bright sound and soulfulness. After 3 CDs featuring Kalabis's symphonies and concertos (Supraphon 2013), the present recording affords yet another insight into the composer's musical universe.

The turbulent events of the recent past reflected in Viktor Kalabis's chamber music!

“The three interpreters are some of the Czech Republic’s most brilliant young instrumentalists. Anchoring things is pianist Ivo Kahánek who has already recorded Kalabis’ solo piano music for Supraphon. Anna Paulová is a most eloquent clarinet soloist and both Tomáš Jamník and Jan Fišer prove masterful in their control of the string sonatas’ rhetoric. With first class sonics this is an indispensable acquisition for admirers of the composer’s music.”
MusicWeb International, November 2018

“All the performances sound as intense and emotionally committed as the music itself, providing an ideal introduction to an important composer who deserves to become far better known.”
Fanfare, January 2019

“The performers understand the composer well, delivering professional and committed renditions that underline the fury and tragedy of each score.”
Fanfare, April 2019