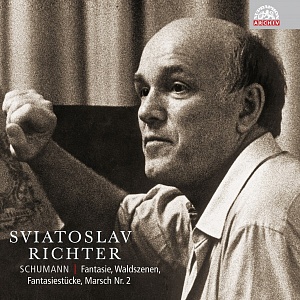 Spotify
Catalogue Number: SU 3795-2
Published: 18th January 2008
Genre: Chamber Music
Format: 1 CD
In 1950 Prague (the Prague Spring festival) was the destination of the first-ever foreign tour of the then 35-year-old piano genius Sviatoslav Richter. Later on the city had the fortune to host him on several more occasions.

The recording of Schumann's Fantasy in C major, released here for the first time, comes from the recital at Prague's Rudolfinum in November 1959,only a few months before Richter's first triumphal tour of the USA and Canada. The composer's painfully subdued lamentation and rent soul, owing to continuous barriers to love with hisfuture wife Clara, finds in Richter a more than emphatic interpreter. The imaginative poetic miniatures Waldszenen (Forest Scenes) date from the period when Schumann was at the very height of his powers. Gathering together all his creative strength and in anticipation of the impending end, he hurled himself into one work after another. In the 1956 recording, it is as if Richter entered not the half-light of the forest, but rather the mind of the composer itself.

Also dating from 1956 is the recording of Fantaziestücke (Fantasy Pieces), the most poetic of all Schumann's series, as well as Fier Märsche (Four Marches) from 1849.