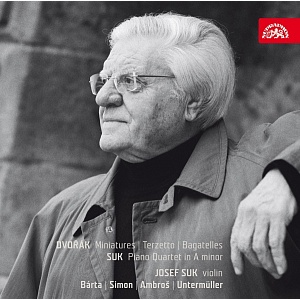 Spotify
Catalogue Number: SU 3976-2
Published: 30th January 2009
Genre: Chamber Music
Format: 1 CD
This album has received following awards:
"The work delights me as if I were writing a grand symphony…" So Dvořák confided to his music publisher, Simrock, when working on Opus 75a (Miniatures). Within a short time, he hadrevised it for violin and piano under the new title Romantic Pieces. The other Dvořák chamber compositions on this CD, Bagatelles and Terzetto, rank up there with this opus when it comes tosheer spontaneity, inventiveness and unrestrained joy. The atmosphere of Hausmusik in which they were composed is augmented by the virtuosity of Josef Suk, a violinist in whose blood this musiccirculates. The majesty, playfulness and emotion with which the Master and his young co-players have acquitted themselves of Dvořák's pieces on this new recording bears witness to the factthat some musicians don't age but, like good wine, mature. The recording is rounded off by an exquisite piano quartet of the then twenty-seven-year-old Josef Suk. The origination of the composition was encouraged by Dvořák himself, Suk's teacher. This recording is a testament to the fact that despite his tender age Suk was already a mature composer abounding in invention.