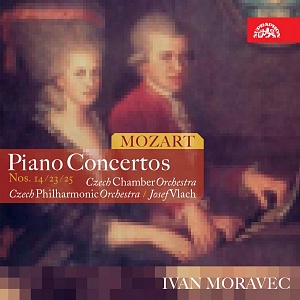 Spotify
Catalogue Number: SU 3809-2
Published: 17th October 2005
Genre: Orchestral
Format: 1 CD
- Although Wolfgang Amadeus Mozart (1756-1791) is revered today primarily as a master of instrumental, sacred and opera music, compositions for piano form a fairly significant portion - about one sixth - of his total output.
- Although Mozart's concertos may not seem technically demanding in comparison to the virtuoso concertos of the Romantic era, they require excellent technique aswell as extraordinarily sensitive interpretation.
- Ivan Moravec (1930) focuses on a select group of compositions which he has studied over and over again through decades of performing, bringing hisinterpretation to maximum depth and perfection. Mozart is one of his priorities, and his Mozart performances are much sought after.
Mozart & Moravec - the composer's genius multiplied by the performer's utter perfection