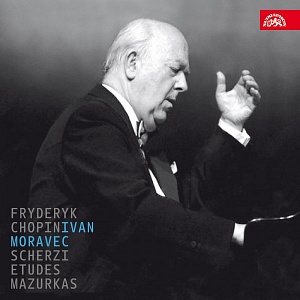 There are treasures tangible and glittering, and there are gems concealed, only revealing themselves to the serene and seeking. The world-famous Czech pianist Ivan Moravec is among the latter - and the same can be said of his recordings. He doesn't need to set out to shock and purposefully set himself apart. The seeming matter-of-factness with which Moravec performs Chopin led aGramophone (II/1992) reviewer to speculate that this is perhaps how the composer's piano improvisation might have sounded. Each tone in its dynamism, each fine accent is well considered and has its place amid the whole. Moravec masterfully balances free agogics with a sense for the overall structure. Chopin's genius stands out most expressively in tiny compositions - and it isin these that Ivan Moravec's mastery is the most distinct; it is not by chance that he has the reputation of being one of the greatest living interpreters of Chopin's works. Bearing witness to this are enthusiastic reviews of the first release of the presented recording (1991, Dorian). Now Supraphon - to the delight of all Chopin lovers and Ivan Moravec fans -is bringing this remarkable album back to life.

The reincarnation of the exceptional recording made by Ivan Moravec, one of the greatest living Chopin interpreters.

”Individual without being idiosyncractic, Moravec's Chopin is all-embracing, capturing in equal measure the elegance, the brilliance and the profound psychological complexity of a tormented genius.”
BBC Music Magazine, November 2011