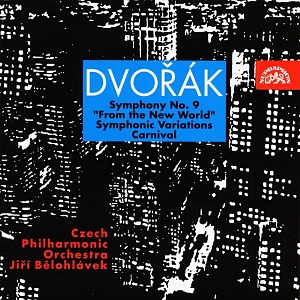 Dvořák: Symphony No. 9 "From the New World", Carnival, Symphonic Variations

Spotify
Catalogue Number: SU 3639-2
Published: 15th April 2002
Genre: Symphony
Format: 1 CD
Neither the "New World" Symphony nor Carnival are works that need special introducton, even to those whose contacts with the world of classical music may otherwise be less than frequent. Here, the compositional mastery of Antonín Dvořák (1841 - 1904) reached the absolute unity of inventive content and elaborate form, to yield works which assumed right from the time of their origin their incontestable place of honour on the international concert repertoire. In effect, they have continued to represent ideal vehicles on which every orchestra will gladly put to test its capacities of precision, equal balance between its various instrumental sections, and refinement of its instrumental solos.
This digital recording of Dvořák best-sellers, being released now with anew, attractive cover, is an ideal gift that is certain to please everyone, as well as a safe tip for the tourist out for a shopping trophy.