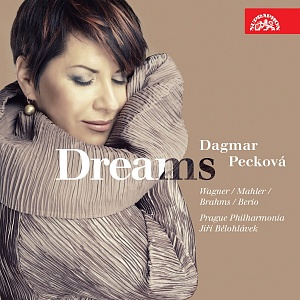 Dagmar Pecková - a world-renowned singer whose professional career could perhaps be best summed up by the sheer number of leading orchestras (Wiener Philharmoniker, Tonhalle Zürich, LPO, LSO, BBC Symphony, NHK Symphony, Cleveland and Pittsburgh SO, etc.) and conductors (Bělohlávek, Herreweghe, Järvi, Mackerras, Sawallisch, etc) she has worked with or by listing her appearances at the most prestigious festivals, concert halls and opera houses. A mezzo-soprano possessing a distinct voice and great charisma, a bold personality who owing to, among other things, her openness has also succeeded in addressing "non-classical" audiences, even though she herself remains faithful to classical music. Pecková has confessed: Mahler and Wagner; two composers who have influenced my entire career. They were discovered for me by Jiří Bělohlávek. I can return to these songs - dreams at any time, and they will never cease to surprise me with their unutterable perfection. Supraphon is now returning to these recordings, which represented a significant milestone in Dagmar Pecková's artistic career and introduced her to the world as a superlative performer of Mahler's music.

The inner world of Mahler's songs - a landscape to which Dagmar Pecková likes returning again and again.