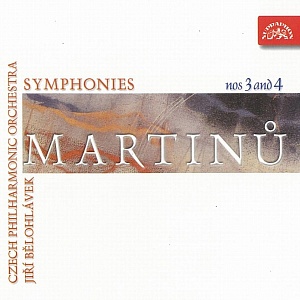 Spotify
Catalogue Number: SU 3631-2
Published: 3rd November 2003
Genre: Symphony
Format: 1 CD
This album has received following awards:
The monumental compositional legacy of master of 20th-century classical music Bohuslav Martinů has over the last few decades become part and parcel of the living repertoire of concert platforms and opera houses worldwide. Martinů's six symphonies constitute literally as many solid foundation blocks of the new era's symphonism. Although the symphonies have turned to staple items on the repertoires of major orchestras throughout the world, only few complete recordings of this section of Martinů's output actually exist. Today therefore, over two and a half decades from the time of the complete set made for Supraphon by the Czech Philharmonic under Václav Neumann, the Czech Republic's premier orchestra is once again called into action on the same task, this time by Jiří Bělohlávek, a leading expert and tireless champion of Martinů's work in his home country and on the international circuit - to present a new generational approach to Martinů's symphonic legacy, with a fresh complete set of his six symphonies. This first CD in the series features Symphonies Nos. 3 and 4. The recording of the complete set is being realized with the scholarly adviceand substantial assistance of the Bohuslav Martinů Foundation in Prague. The whole project will be accomplished within the next two years.

Bohuslav Martinů symphonies tackled by a new generation of musicians.