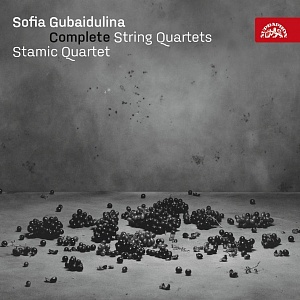 Sofia Gubaidulina, one of the most distinct composers of the present time, says of herself that she is "a daughter of two worlds, whose soul lives in the music of both the West and East". From her father's side, her life was entered by the world of Islamic culture, while her mother introduced her to Christianity, in which she found her identity in the Orthodox faith. Her quest for a singular style was strongly influenced by the legacies of J. S. Bach and Anton Webern, as well as Dmitri Shostakovich, who encouraged her to remain herself and "continue down the mistaken path" for which she was criticised by the guardians of aesthetic correctness in the Soviet Union. Gubaidulina's personal story is one of a struggle to live in truth, conducted with calm, patience, perseverance and inner conviction. The five string quartets represent a singular journey towards a vision of freedom beyond the borders of any system: she extracts the material from beyond major-minor tonality, using micro-intervals, serial techniques, aleatory elements, unusual playing methods, thus revealing previously unthought-of acoustic possibilities of instruments, including the space itself, the movement of musicians, etc. The Stamic Quartet, an ensemble representing the famous Czech quartet school, is an attentive interpreter of the first complete recording.