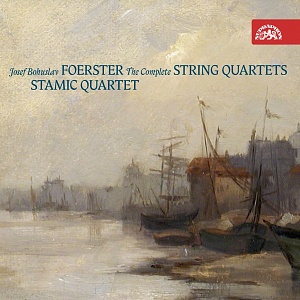 Spotify
Catalogue Number: SU 4050-2
Published: 18th June 2010
Genre: Chamber Music
Format: 2 CD
Following the acclaimed recordings of the two violin concertos (SU 3961-2) and the cello concerto (SU 3989-2), Supraphon returns to the work of Josef Bohuslav Foerster, a composer somewhat neglected until recently. This double CD presents for the first time his complete string quartet oeuvre. The first quartet (1888) is dedicated to Tchaikovsky, who recognised in Foerster a talented music creator and in a letter encouraged him to persevere with composing. The form of string quartet would subsequently accompany Foerster until the very end. The fifth quartet, "The Vestec"(1959), is Foerster's final work. After a long and arduous creative journey and seeking, he returns in it to his Smetana and Dvořák roots, already evident in the first quartet. This recording is supplemented by three minor compositions (including Erinnerung for string quartet and harp) and the idiomatic two-movement string quintet with double bass.

Stamic Quartet, one of the foremost ensembles representing the renowned Czech quartet school worldwide, interprets Foerster with technical mastery and an understanding of the deeper layers of his work.

“Foerster’s little-known chamber oeuvre comes as a revelation, especially in performances as committed as these. The Bohemian melodic inspiration is unmistakable, as is the autumnal wistfulness of the slow music…there’s no let-up in creative inspiration or the appealingly direct late romantic idiom.“
Financial Times, 11th September 2010

“The music is influenced by Dvorak and Smetana, but it has a rich, flowing melodic lyricism which is all Foerster's own contribution. When played so expertly and with such sympathetic warmth, Foerster is revealed as a composer to return to and to give the listener much pleasure.“
The Pinguin Guide 2011 Edition

“Passion and technical excellence are not wanting at any point; not in the great pieces on this disc, nor in the fillers. No hint of mediocrity around. If I could go back and make this one of my “Best Classical Recordings of 2010”, I would.“
Forbes, 17th September 2017