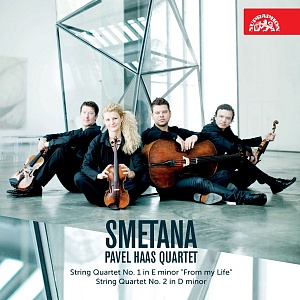 After their Janáček quartets and their award-winning Dvořák (Gramophone Award 2011 "Recording of the Year"), the Pavel Haas Quartet have now put all their energy to the service of the music of Bedřich Smetana. Even though his chamber music is very modest in scale, each of these works can be said without exaggeration to be a foundation stone of Czech chamber music. They are personal works, often with a strong autobiographical element. He wrote both quartets towards the end of his life when he was already suffering from deafness. The first quartet, "From My Life", is programmatic: "I wanted to express musically the course of my life… The composition is almost entirely private, and so intentionally written for four instruments that should talk together - as if they were a close circle of friends - about the things that have shaped me so significantly." Quartet No. 2 seems almost to belong to the 20th century in the unconventionality of it's composition - something that greatly disturbed Smetana's contemporaries. For the Pavel Haas Quartet, Smetana's music is an obvious and clear choice, not a sudden revelation; it is "only" the concept of the music itself that is revelatory. The Quartet doesn't try to make itself stand out in some superficial, external way - it doesn't bet on extremes. It's originality comes from its efforts to penetrate to the very core of the work and from the thrilling and comprehensive way in which it achieves this. So, how does our immortal Smetana sound in the twenty-first century? You will find the answer on this stunning recording.

"From My Life" - Classic Smetana, inward-looking and timeless, as heard by the Pavel Haas Quartet.

“In the autobiographical No 1 what captivating lyrical ardour and devastating emotional candour these superlative young players display … a disc to treasure.”
Classical Ear, July 2015