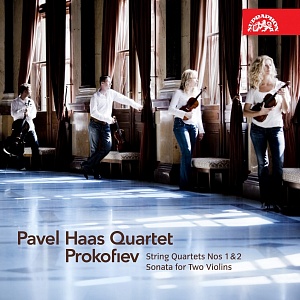 Spotify
Catalogue Number: SU 3957-2
Published: 15th January 2010
First release: SUPRAPHON, 2009
Genre: Chamber Music
Format: 1 CD
This album has received following awards:
The Pavel Haas Quartet, one of the very finest chamber ensembles of the present time, earned for their first two CDs (Janáček, Pavel Haas) numerous prestigious accolades (Classic FM Gramophone Award, BBC Music Magazine Award, Cannes MIDEM Classical Award, etc.). With the Prokofiev pieces featured on this album the Quartet has for the first time entered the field of the Russian (or, if you will, international) repertoire.
Prokofiev plunged into writing his first quartet in 1930 during his first sojourn in America on the basis of a commission from the Library of Congress inWashington DC. The "classically" sounding work blends the easily distinguishable inspiration by Beethoven's quartets and the typically Prokofievian pungency and lyricism. The duet, written in Paris, is an inconspicuous yet masterly small-scale work of art and alongside Bartok's 44 violin duets ranks among the paramount opuses of this genre. The second quartet came into being in 1941 in the Caucasus, where the Soviet government had moved the artistic elites and their families so as to protect them against the Nazi onslaught. Here Prokofiev came across untouched folk material which he sensitively, humbly and with the precise degree of artistic stylisation incorporated into the "Kabardinian" quartet. Their sheer musicality and ferocious youthful energy make the Pavel Haas Quartet an ideal interpreter of these gems of Prokofiev's chamber oeuvre.

“There is a fairly high level of intensity in these Prokofiev works for the young Czech players to meet, and they rise vividly to the challenge…it's pro­bably right that [they] feel its ebb and flow with passionate engagement.”
BBC Music Magazine, April 2010

“Prokofiev's Second Quartet is one of the most immediately attractive quartets in the repertoire. In the wondrous Adagio the cello line rises high, ghostly melodic statements in octaves can expose the smallest tuning difficulties and pizzicati needs must sparkle like ice. The young players pass every test before dispatching the inventive finale with equal aplomb… The strenuously wrought First Quartet comes off just as well. The concluding Andante… is rarely tackled with the passion you find here. Of the small clutch of „classic“ performances of the component pieces, none is more usefully programmed than the present disc, nor so naturally recorded. Why hesitate?”
Gramophone, March 2010

“Their tone is large, quasi-orchestral. They take risks; often they play fast. Above all, they play with passion…Semi-quavers scurry, all sinews showing. Fortissimo attacks blast your socks off…Gloriously invigorating and a great antidote to the winter blues.”
The Guardian, 29th January 2010