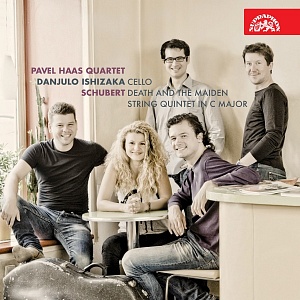 Schubert: String Quartet No.14 in D minor "Death and the Maiden", String Quintet in C Major

It may have seemed that after receiving the prestigious Gramophone Recording of the Year award in 2011 for their album featuring Dvořák pieces there were no higher accolades the young Pavel Haas Quartet could achieve. Yet, fortunately, the ensemble cares more about music than garnering prizes. Schubert's two paramount mature works, rightly ranked among the most valuable chamber gems, represent their Ace of Hearts. The String Quartet in D minor has a sort of dark cipher encoded within. The title "Death and the Maiden" reflects the quotation from Schubert's eponymous song in the second movement. The theme of death is also underlined by other quotations and the choice of the key of D minor, which according to the period definition is characterised by "heavy-hearted womanliness, spleen and foreboding". Schubert completed his String Quintet in C major for an uncommon formation with two cellos a mere two months before his death. Its instrumentation occasionally gives an almost orchestral impression, with the cello playing a significant role as the bearer of melody. The Pavel Haas Quartet invited along a distinguished friend to the recording sessions, the exceptional German-Japanese cellist Danjulo Ishizaka, whose qualities were concisely described by Mstislav Rostropovich: "Phenomenal in his technical ability, perfect in his musical creative power".

Schubert - yet another Ace of Hearts of the Pavel Haas Quartet.

“This album is scalding to the touch. [the Haas's accounts] are irresistible not only for immaculate surfaces, but for effortless engagement of that grief-stricken quality beneath Schubert’s shows of gaiety and even his most serene assurances.”
The Sunday Times, 15th September 2013

“If CDs had grooves I would already have worn out these marvellous recordings…The young Czechs have the perfect fusion of virtuosity and profundity.”
The Times, 21st September 2013

“This is good. Very good. Acclaim and the Pavel Haas Quartet are familiar bedfellows – after all, they did win Gramophone's Record of the Year for their Dvořák two years ago. But this is their first recording that really steps into a crowded marketplace. They represent the best qualities of the Czech tradition – warmth, sonorousness, individuality, intensity; but what's striking here is their fearless risk-taking, their fervency and the absolute confidence with which they propel you through these two masterpieces.”
Gramophone, October 2013

“The Pavel Haas Quartet, with the superb extra cellist Danjulo Ishizaka, even succeed where most other ensembles fail, making the last movement of the String Quintet into something that seems a fitting conclusion to a work whose first three movements are unquestionably supreme…essential listening for anyone who loves Schubert.”
BBC Music Magazine, Christmas Issue 2013

“The perfect fusion of virtuosity and profundity from the young Czechs of the Pavel Haas Quartet in Schubert. Death and the Maiden is given the more melodramatic reading, but the subtly nuanced performance of the Quintet in C is sublime.”
The Times, 14th December 2013

“For me, the performance here ticks all the right boxes. From the opening chords, you feel that these young players are taking you on a journey. Having a clear vision and understanding of the structure of the music, they explore its full emotional range. Warmth and expressive phrasing are a distinguishing hallmark… These young players are a force to be reckoned with.”
MusicWeb International, December 2013

“We’re treated here to performances of not only great refinement and polish, but also real emotional depth… A combination of subtle elasticity of tempo whilst never slowing too much gives this performance [of Death and the Maiden] great structural coherency from beginning to end.”
Presto Classical, 23rd December 2013