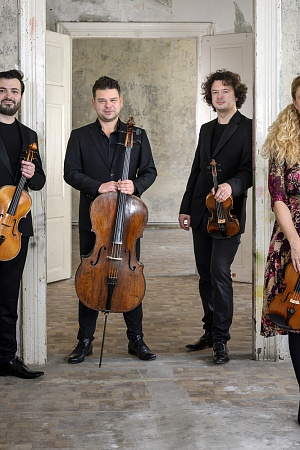 The Pavel Haas Quartet was founded in 2002 by the violinist Veronika Jarůšková and the violist Pavel Nikl, who was a member of the ensemble until 2016, when he left due to family reasons. Yet their collaboration has continued – Pavel Nikl has been the ensemble’s per­manent guest for string quintet performances. Since 2004, the second violin has been played by Kateřina Gemrotová Penková, Marie Fuxová and Eva Karová Krestová. Since 2016, the viola has been played by Radim Sedmidubský.
Following their victory in the Prague Spring Festival Competition and Premio Paolo Borciani in Reggio Emilia, Italy in 2005, the Pavel Haas Quartet soon established themselves as one of the world’s most exciting contemporary chamber ensembles. Performing at the most renowned concert venues around the globe, the PHQ have to date recorded six critically acclaimed CDs, which have received numerous prestigious awards. The ensemble members studied with Milan Škampa, the legendary violist of the Smetana Quartet, with whom they have worked and been friends over the long term.
In 2007, the European Concert Hall Organisation (ECHO) named the Pavel Haas Quartet one of its Rising Stars, following which they were afforded the opportunity to give numerous high-profile concert appearances all over the world. Between 2007 and 2009, the Pavel Haas Quartet held the title of BBC New Generation Artist. In 2010, the ensemble was granted a classical music fellowship from the Borletti–Buitoni Trust.
The Pavel Haas Quartet have exclusively recorded for Supraphon. Their very first album (2006), featuring Leoš Janáček’s String Quartet No. 2, “Intimate Letters”, and Pavel Haas’s String Quartet No. 2, “From the Monkey Mountains”, earned the ensemble their first Gramophone Award. The Daily Telegraph named it CD of the Year. The second album, completing the mapping of Leoš Janáček’s and Pavel Haas’s quartet works, garnered enormous acclaim too. Gramophone wrote about it: “To describe a CD as musically important is to court a certain level of controversy … but I'll stick my neck out and claim extreme importance for this release.” Their third CD, featuring both Sergey Prokofiev quartets and the Sonata for Two Violins, won France’s Diapason d’Or de l’Année 2010. The fourth album, containing Antonín Dvořák’s quartets in F major, the “American”, Op. 96, and in G major, Op. 106, received the 2011 Gramophone Award in the Chamber category, as well as the most coveted prize of all: Recording of the Year. The Sunday Times gave the album the highest possible rating: “Their account of the American Quartet belongs alongside the greatest performances on disc. In this repertoire, they are simply matchless today.” In 2014, the Pavel Haas Quartet received yet another Gramophone Award, for the album of Schubert’s String Quartet in D minor, “Death and the Maiden”, and String Quintet, recorded with the German cellist Danjulo Ishizaka. Their most recent CD, featuring Smetana’s String Quartets Nos 1 and 2 (2015), earned the ensemble their fourth Gramophone Award and second BBC Music Magazine Award. Gramophone emphasised that: “Their sound is, as ever, immediately recognisable – partly due to the sheer richness of timbre but also the sense of four personalities at play… At times it is hard to believe you are in the presence of only four players, so intense is the sound”.