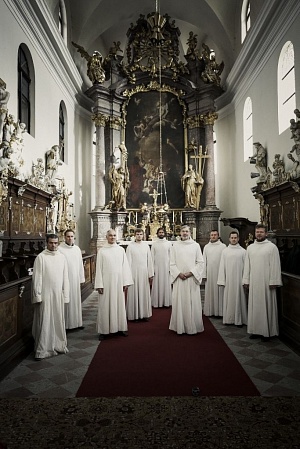 The Schola Gregoriana Pragensis was established by David Eben in the year 1987. During first two years of its existence the ensemble was allowed to sing only in the liturgy. This limitation ceased after 1989 and since then it has been intensively recording and giving concerts abroad, too (Italy, Spain, France, Belgium, the Netherlands, Germany, Austria, Switzerland, Norway, Sweden, Slovakia, Hungary, Poland, Israel, Japan). The CDs of the ensemble arise exclusively in co-operation with the major Czech musical publisher, Supraphon company, and have received a number of awards (Choc du Monde de le Musique, 10 de Repertoire, “Zlata Harmonie” – Golden Harmony Award for the best Czech recording of the year). The ensemble records for the Czech Radio, too. In this case the list of its issues amounts respectable 319 compositions. The Schola has co-operated in various projects with a whole range of top-notch Czech as well as foreign interprets (Petr Eben, Jiri Barta, Jaroslav Tuma, Iva Bittova, Choeur gregorien de Paris, Boni pueri, Musica Florea, the ensemble of Japanese talapoins Ohara Gjosan shomjo kenkju-kai, Varmuza’s Dulcimer Music Band, Jeaner Philharmonie, etc.).
The ensemble belongs to foremost world interpreters of medieval sacral music. It has been focusing its work both on the semiological interpretation of Gregoriant chant according to the earliest neumatic sources from the 10th to 11th century, and on presentation of the original Bohemian plainchant tradition, including early polyphony. Thanks to ensemble’s in­tensive study of medieval sources, its programmes also include a number of unique, newly discovered compositions dating from the 13th to 15th centuries. The large gamut of repertoire offers also contemporary music (see eg. the CD Antica e moderna) – some compositions of young Czech composer generation have been written rightly for the Schola and were premiered in its interpretation.
Regarding the records and concert projects, the audience as well as expert reviews appreciate chiefly their dramaturgical imaginativeness and musical interpretation, with which the ensemble brings alive the repertoire originating from the very roots of European musical culture.