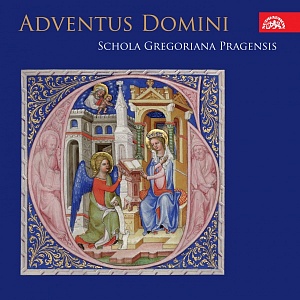 Adventus Domini. Advent “Rorate Mass” in Bohemia in the 15th and 16th Century

Picture the scene: Advent, a snow-covered Czech landscape; it is still night yet the windows of a small chapel on the hillock in the centre of the village glow warmly in the dark. The worshippers have gathered at a Rorate mass. This image is more than 500 years old, yet we can still encounter it in the Czech countryside today. The Advent tradition of celebrating the Marianmass before daybreak stretches back to the Middle Ages. The "Rorate" got its name from the Latin text of the first antiphon Rorate coeli (Drop down dew, ye heavens). This recording presents a reconstruction of the Rorate mass, as it developed from the early Middle Ages to the second half of the 16th century. Alongside the Gregorian chant, the greatest scope is afforded to the typically Czech repertoire, homophonic and, above all, polyphonic sacred song. This, however, also reflects the influence of Franco-Flemish 16th-century polyphony, which was amply performed by fraternities of men of letters. The recording draws from marvellous manuscripts (the Kodex Speciálník, Kodex Franus, etc.), in which the treasures of this repertoire have been preserved. One would be hard pressed indeed to find finer Rorate mass interpreters than Schola Gregoriana Pragensis - an ensemble with a long tradition, beautiful voices and international renown. Rorate chants usher inAdvent, its peace, and foreshadow the mystery of the Nativity of the Lord.