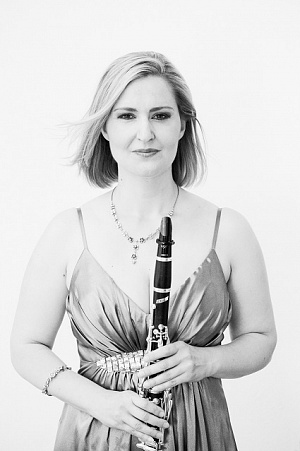 Ludmila Peterková, the foremost Czech clarinettist of her generation, first asserted herself as early as 1984, as laureate of the Concertino Praga competition, an award followed by others, from the 1991 Prague Spring Festival contest, and for her rendition, with the Prague Chamber Orchestra, of the premiere of Ondřej Kukal´s Clari­nettino, which earned her the prestigious Czech Classic ´94 prize.
In September 2000 she was invited to perform with the Czech Philharmonic Orchestra under Vladimir Ashkenazy Mozart´s Clarinet Concerto in A major, in a concert given for participants in the annual meeting of the International Monetary Fund and World Bank. Her other triumphs have included a highly acclaimed appearance with the Prague Symphony Orchestra, in a concert opening the Mitte Europa 2000 festival, attended by top representatives of the European Union.
As a soloist, she has worked with the Solistes Européens Luxembourg, Elbland Philharmonie Sachsen, and all leading Czech orchestras (Czech Philharmonic Orchestra, Prague Symphony Orchestra, Prague Chamber Orchestra, Prague Philharmonia, Virtuosi di Praga, Brno State Philharmonic Orchestra, Pardubice Chamber Philharmonic Orchestra), touring in Belgium, Luxembourg, Spain, Germany, France, Hungary and Slovakia.
Since 2000 Ludmila Peterková has had an exclusive recording contract with Supraphon. Her most recent title, featuring chamber music by Khachaturian, Bartók, Stravinsky and Milhaud, is accompanied by a video choreographed by Libor Vaculík. Ludmila Peterková´s or­chestral projects include recordings of compositions by Copland, Busoni, Milhaud, Jan Stamic and Karel Stamic (on Lotos label), with the Prague Philharmonia conducted by Jiří Bělohlávek, and also featuring the violinist Josef Suk. In 2001 she has prepared an album of works by Rossini, Mendelssohn-Bartholdy and Bruch.
Joining forces with her frequent partners Josef Suk and Josef Hála, she has taken part in recording for Supraphon a programme of trios by Max Bruch and W.A. Mozart. Her many concert platform partners have so far included mezzo-soprano Magdalena Koená, harpist Jana Bouková, violinist Gabriela Demeterová, cellist Jiří Bárta, pianist Igor Ardaev, and the Kocian and Panocha Quartets. Figuring on the list of her international soloist collaborators are oboist Maurice Bourgue, bassoonist Sergio Azzolini, pianist Elizabeth Leonskaya, violinist Schlomo Mintz, conductor Jin Wang and others.
She is a member of In modo camerale ensemble with whom she has made a recording of French chamber music, and works of Bohuslav Martinů and W.A. Mozart. In 1996 the ensemble reached the finals of the chamber music competition in Osaka, Japan. Miss Peterková´s re­cording projects for Supraphon have included two widely praised CDs, one with Mozart and Bruch trios also featuring Josef Suk and Josef Hála, and the other with trios of Stravinsky, Khachaturian, Milhaud and Bartók, on which she appears with Gabriela Demeterová and Markéta Cibulková.
Ludmila Peterková has taken part on a regular basis in concert series organized for the benefit of the Motol Hospital Children´s Ne­urology Centre Endowment which has been involved in installing several intensive care units within that ward and in improving the conditions of children patients and their parents during the former´s hospital treatment.
Miss Peterková has devoted herself systematically to music since eight years of age. She studied at Prague Conservatory and furthered her education at the Academy of Music in Prague, subsequently to frequent courses conducted by Karl Leister in Lugano, Switzerland, and a yearlong study visit at Paris´ Conservatoire National Supérieur, under Professor Michel Arrignon. Beyond that, she received private schooling from Philippe Cuper, Guy Dangain and others, and attended the International Chamber Music Academy operating under the artistic direction of Maurice Bourgue. As a 27-year-old she was appointed professor at Prague Conservatory. A founding member of the Prague Philharmonia, she spent four years with that orchestra as its solo clarinettist.