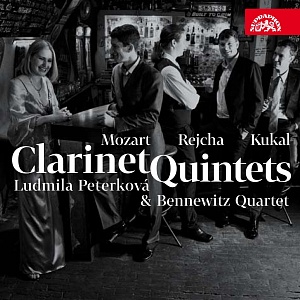 Three compositions that came into being over the period of some 200 years yet have much in common; their creators had a penchant for the clarinet and in these works let the amplitude of their melodic inventions resound to the full. And all three composers were inspired by a superlative clarinettist. Mozart wrote his quintet for the virtuoso Anton Stadler, Ondřej Kukal composed his catchy Clarinettino for the rising clarinet star Ludmila Peterková, who premiered the piece to great acclaim and now after two decades has returned to it on this recording. For many of those familiar with some of the other innumerable recordings of the piece, this take on Mozart's "Stadler" quintet may sound somewhat unusual since Ludmila Peterková has decided to play it on the deeper basset clarinet, an instrument of an enchantingly velvety timbre, for which it was originally written. When it comes to Rejcha's quintet, you will immediately realise that it is not included just "to make up the numbers" but is a piece that in its playful inventiveness holds its own even in juxtaposition to Mozart's perfect equanimity. A superb partner to the clarinettist is the Bennewitz Quartet, one of the finest continuers of the celebrated Czech quartet tradition, as evidenced by their successes at international competitions (ARD Munich in 2004, 1st prize and gold medal in Osaka, 1st prize at the Premio Paolo Borciani in 2008), as well as the rapturous responses to the concerts they have given on the most prestigious stages throughout Europe, the USA and Japan.