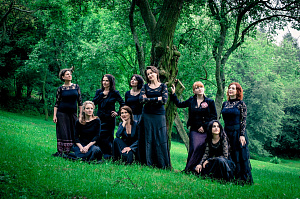 Established in 2008 in Prague, the Tiburtina Ensemble of female voices specializes in the interpretation of Gregorian chant, Medieval polyphony, and contemporary music. The ensemble ranks among the best in Europe in the field of early music performance thanks to its unmistakable timbre and its ardent expression, very much appreciated by listeners.

The artistic director of the ensemble is singer, musicologist and harpist Barbora Kabátková (b. Sojková).

Concert programmes are devoted not only to vocal-instrumental compositions of the Middle Ages but also to non-traditional projects combining Medieval music with other musical genres.

TThe ensemble performs at leading concert venues all over Europe.

In 2011 it released its first compact disc, Flos inter spinas (Blossoms among the Thorns) on the Supraphon label; the second compact disc, Apokalypsis, was released on Animal Music label in 2013, the album “Ego sum homo” is its third (August 2017, Ricercar label) and the album „Vidi Speciosam“ with music of T. L. Vitoria is the last one in this moment (April 2018, Sony/Deutsche Harmonia Mundi). The ensemble took its name from a figure in Medieval history: Tiburtina (or the Tiburtine Sibyl) was a prophetess who became the best known sibyl of the Middle Ages mainly because her oracles were closely connected to Christianity. The parallels between the pagan sibyl and the Christian prophetess are obvious: their noble origin, their preaching expeditions, inquiries from persons in positions of power, and the ability to see all the way to the end of the world, something which was denied to men however learned they might be.