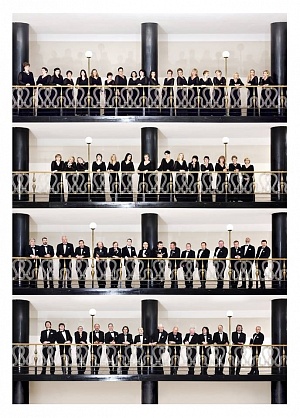 The Prague Philharmonic Choir is one of the most distinguished professional vocal ensembles in Europe. Under the moniker Radiojournal Prague Choir, it was founded in 1935 by Jan Kühn. The current principal conductor, Lukáš Vasilek, has led the choir since 2007. The Prague Philharmonic Choir has given numerous performances with orchestras of such renown as the Czech Philharmonic, the Berliner Philharmoniker, the Gewandhausorchester
Leipzig, Amsterdam’s Con­certgebouw, the Orchestre de l’Opéra national de Paris and the Israel Philharmonic. It has appeared at prestigious concert venues and opera houses, including La Scala in Milan and the Bayerische Staatsoper, and worked with a host of famous conductors, including Claudio Abbado, Daniel Barenboim, Pierre Boulez, Riccardo Muti, Zubin Mehta, Kurt Masur, Christoph Eschenbach, Sir Simon Rattle, Fabio Luisi, Jiří Bělohlávek, Manfred Honeck and Philipp Jordan. The Prague Philharmonic Choir’s extensive repertoire primarily encompasses a cappella pieces, cantatas and oratorios, ranging from Classicist to contemporary music. A significant part of its accomplishments is formed by opera projects, collaborating, for instance, with the National Theatre in Prague and the Bregenzer Festspiele, where since 2010 it has been an ensemble-in-residence and where it has not only performed the classical repertoire works, but also given several world premieres, including of brand-new operas. The choir’s discography is extensive indeed, including recordings for Supraphon, Decca, Deutsche Grammophon and Sony Classical. Moreover, the Prague Philharmonic Choir, sponsored by the Ministry of Culture of the Czech Republic, has also devoted to educational activities, organising the Choral Singing Academy and special concerts.