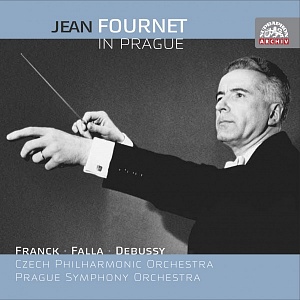 In the past century, Jean Fournet (1913-2008), a "gentle perfectionist", as some of the critics characterised him, was one of the leading champions of French music throughout the world. In addition to heading globally renowned orchestras (director of the Opéra-Comique in Paris, chief conductor of the Netherlands Radio Philharmonic Orchestra, the Rotterdam Philharmonic and the Tokyo Metropolitan Symphony Orchestra), he also left a distinctive footprint in Prague, with the Czech Philharmonic in particular. He first appeared there as a guest at the Prague Spring festival in 1954, then in January 1961, and for the last time, at the age of 90 (!), in 2003. At the time of the Iron Curtain, Fournet represented for the Czech Philharmonic a rare and precious opportunity to enter the world of French music with the most competent guide there was. During his visits to Prague between 1963 and 1967, he and the orchestra made the enchanting and highly acclaimed recordings presented on this CD: in their "Ančerl" period, the Czech Philharmonic naturally embraced Fournet's refinement, sense of form and purity of colours. The precious recordings, newly remastered, are being released on a Supraphon CD for the very first time. Enchanting French flamboyance ? la Jean Fournet.