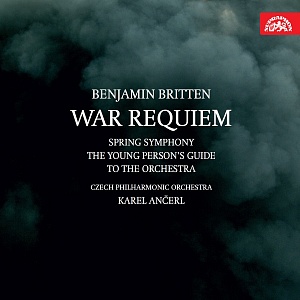 Benjamin Britten's music formed one of the pillars of the Czech Philharmonic's concert programmes under its chief conductor Karel Ančerl. The famous Variations on a Theme of Purcell was in all likelihood the most frequently performed work (in 1962 also in England), and this CD contains the previously unreleased 1958 recording in the original version without narration. The enchanting and joyous Spring Symphony, commissioned by Serge Koussevitzky, was presented in Czech in Prague by Ančerl, the Czech Philharmonic and the finest soloists of the time. Forming a stark contrast to these two works is the War Requiem, a grand piece commemorating the victims of the most gruesome armed conflict in human history. Britten dedicated it to the memory of four friends of his who died in WWII while serving in the British navy or army. The work's Czech premiere, with the participation of superlative foreign soloists (Gerald English, John Cameron), took place less than four years after its world premiere. So enthused was he by the work that in November 1969, following his emigration to Canada, Ančerl included the War Requiem in one of his first concerts in Toronto. The conductor's personal profound experience of the senseless barbarity of the war imbued his conception of the work with a chilling authenticity. Both of the two previously unreleased concert recordings were made by the former Czechoslovak Radio.

“[English's] elocution is in every way comparable to Peter Pears's own, the instrument even leaner and the delivery trenchantly objective…This is no the most pleasant-sounding recording of the War Requiem. It is surely, though, the one which best draws together the threads of this difficult form.“
International Record Review, September 2013

“The Czech premiere of the War Requiem from 1966 is raw but urgent..Collectors will be pleased to encounter leading Czech singers Naděžda Kniplová and Beno Blachut among the soloists but this set is strictly one for the historical category.“
Gramophone, October 2013

“English’s singing is consistently clear and incisive and Cameron has a fine, rounded tone and an excellent sense of line…[Kniplová] projects the ‘Liber scriptus’ powerfully and accurately…she’s fu­lly up to the work’s histrionic challenges…An­čerl’s directi­on of the score is impressive. He’s clearly committed to the music and he ensures that rhythms are crisply articulated.“
MusicWeb International, 11th November 2013