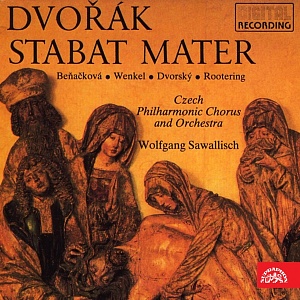 Wolfgang Sawallisch (born in 1923 in Munich) first studied piano with Wolf Ruoff and only later conductiong at the Munich College of Music where his professor was Josef Haas. He began his conducting career in 1947 in Augsburg, from 1953 was in Aachen, eventually returning to his native Munich via Wiesbaden and Cologne. Today he is the general music director and simultaneously the manager of the State Opera. We first heard Sawallisch in Prague conducting the Czech Philharmonic Orchestra during the Prague Spring festival of 1958 and since then he has been a guest at this festival seven times more. In between, however, he has also been a guest conductor of the Czech Philharmonic and we even heard himas a pianist with Josef Suk as his sonata partner. Sawallisch, as one of the leading opera conductors today and a great admirer of Czech music, literally fell in love with the Czech Philharmonic Chorus which he conducted in big oratorios and cantatas (he even invited it in 1964 to the Milan La Scala for several performances of Wagner's Lohengrin). He very gladly visits us tocollaborate both with the Czech Philharmonic Orchestra and its chorus. His visits to the Prague Spring festival in recent years, when he conducted the Beethoven Ninth, are eloquent testimony of this. Stabat Mater is therefore the consistent and logical continuation of a number of Sawallisch's great artistic creations in this sphere.