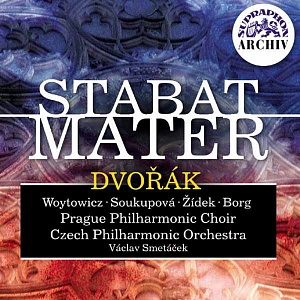 Spotify
Catalogue Number: SU 3775-2
Published: 12th January 2004
Genre: Vocal - Religious
Format: 2 CD
The fascinating poetic text of the medieval sequence, Stabat Mater, widely attributed to the Italian lawyer and Franciscan monk Jacopo de Benedetti (1230 - 1306), has inspired an endless list of composers to create some of their finest works. For his part, Antonín Dvořák (1841 - 1904), who had lost two children in the late summer of 1877, transformed the immense pain of that tragic experience into his own setting of the famous Latin text, producing one of his best-loved compositions. This stereo recording of Dvořák's Stabat Mater, with Václav Smetáček conducting the Czech Philharmonic and featuring a major cast of soloists, was last issued at the time of its making (1962) - and yet, its sonic brilliance and artistic accomplishment alike have detracted nothingfrom its potential as an unfailingly enriching contribution to Supraphon's collection of recordings of this treasure of Czech sacred music.

A gem of Czech sacred music in a little known account.