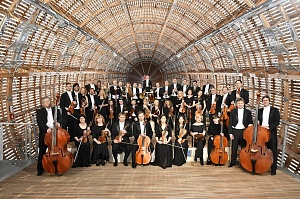 The PKF – Prague Philharmonia was founded in 1994 on the initiative of the conductor Jiří Bělohlávek (1946–2017) under the original name Prague Chamber Philharmonia. Today it is one of the most recognised orchestras, not only among Czech but also world ensembles. Regular invitations to tour abroad as well as recording projects with the most renowned international labels bear testimony to this. Since the 2015–16 season the orchestra has been led by the French conductor Emmanuel Villaume.
Freshness, energy and perfectionism are characteristics inscribed in the orchestra’s ‘Birth Certificate’, as well as a love of music expressed in each of their concerts. Behind the highly valued distinctive sound of the PKF – Prague Philharmonia is partly its key repertoire, which has been from the beginning Viennese Classicism, namely compositions by Joseph Haydn, Wolfgang Amadeus Mozart and Ludwig van Beethoven. However, the PKF is remarkably flexible in this respect, and is capable of expanding from concertanto repertoire for a chamber set up without a conductor, to projects involving a large symphony orchestra augmented by extra players from the PKF Orchestral Academy. In this way, even as a large body, the PKF is able to retain the characteristic sound that Jiří Bělohlávek honed with them over a period of eleven years, as well as its esprit, linking the generation of excellent, experienced players with the greatly talented and perfectly technically prepared younger players.
PKF – Prague Philharmonia is a frequent partner of renowned conductors and soloists, including Vladimir Ashkenazy, Milan Turković, Jefim Bronfman, András Schiff, Anna Netrebko, Diana Damrau, Angela Gheorghiu, Magdalena Kožená, Natalie Dessay, Rolando Villazón, Plácido Domingo, Elina Garanča, Juan Diego Flórez, Thomas Hampson, Sarah Chang, Isabelle Faust, Mischa Maisky and Gábor Boldoczki.
PKF – Prague Philharmonia is regularly invited to international music festivals and gives concerts at top world venues (BBC Proms, MITO Settembre Musica, Royal Opera House Muscat in Oman, Prague Spring, Festspielhaus Baden Baden, Elbphilharmonie Hamburg, Gasteig Munich, Tokyo, Paris, San Francisco etc.). Before the end of 2017 it will tour China and perform in Europe with the trumpet player Gábor Boldoczki (in Germany, France and Hungary) in connection with the first collaborative recording for Sony Classical.
Over the period of its existence, the orchestra has recorded over 80 CDs released by leading Czech and world music publishers, such as Deutsche Grammophon, Decca, Supraphon, EMI, Warner Classics and Harmonia Mundi. A number of them have been awarded prizes, such as the Gold Record RAC Canada in 2000, Harmony Award in 2001 and Diapason d’Or in September 2007. The CD Heroique with Bryan Hymel was in 2016 nominated for an International Opera Award. The PKF – Prague Philharmonia has collaborated on recordings with Anna Netrebko, Magdalena Kožená, Bryan Hymel, Isabelle Faust, Eva Urbanová, Andrew von Oeyen, Jean-Guihen Queyras, Iva Bittová and Dagmar Pecková. Among the critically acclaimed CDs stands out the live recording of Smetana’s Má vlast (My Country) from the Prague Spring Festival in 2010, conducted by Jakub Hrůša.