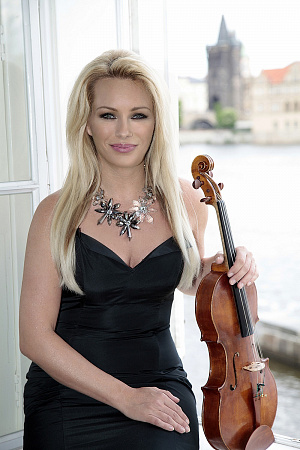 She studied at the Plzeň Conservatory and the Academy of Performing Arts in Prague with Jan Pěruška and also took lessons from the legendary Italian violist Luigi Alberto Bianchi, who has led her towards virtuosity. While still a student, she gained valuable international experience and garnered accolades as a soloist and chamber player alike. As a member of the Bennewitz Quartet, which she co-founded, she worked under the guidance of top-notch ensembles, including the Amadeus Quartet, the Alban Berg Quartet and the Smetana Quartet. Their collaboration culminated in 1999 with the recording of a CD featuring quartets by Leoš Janáček, Hans Krása and Pavel Haas. A superb chamber musician, she has performed as a guest of the renowned Janáček Quartet, Zemlinsky Quartet, Wihan Quartet, Martinů Quartet, Epoque Quartet and Apollon Quartet. In 2005, Jitka Hosprová, the Czech harpist Kateřina Englichová and the Luxembourg flautist Carlo Jans formed the Bohemia Luxembourg Trio. Moreover, Jitka Hosprová and the Italian violin virtuoso Maurizio Sciarretta have recently gained acclaim as the Grand Duo.

She has given Czech and world premieres of a number of pieces for the viola. The composers who have created new works for her include Zdeněk Lukáš, Jiří Teml, Josef Vejvoda, Emil Viklický, Ladislav Kubík, Lukáš Hurník, Eduard Douša, Adam Skoumal, Michal Müller, Tomaž Svete and Guillaume Connesson.

Jitka Hosprová has founded and is the director of the Walks in the Art festival. She plays a Czech instrument made in 2012 by Petr Zdražil.