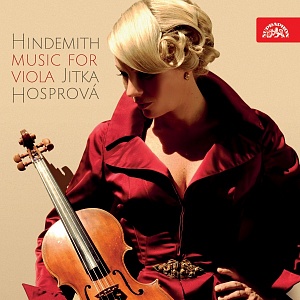 On her previous album, Monologue (SU 4049-2), Jitka Hosprová presented to listeners the most distinct gems of modern Czech music for solo viola. Her new CD is dedicated to Paul Himdemith - a composer who essentially contributed to the emancipation of the viola in the previous century. The artist wrote all his viola works within twenty years or so and upon ceasing to give concerts as a solo violist abandoned composing for the instrument for good. The pieces featured on the present album also bear witness to Hindemith's journey from reverberations of Romanticism and Impressionism to attaining his own singular musical language, which is already evident in Sonata Op. 25. The celebrated Trauermusik came to life in London within a mere six hours and on the evening of that very day in January 1936 was broadcast live - with Hindemith as a soloist - by the BBC in honour of the deceased King George V. As delivered by the technically brilliant Jitka Hosprová, Hindemith's music is emotionally rich, profound and colourful, as is the viola itself.

A homage to the previous century's King of the Viola, as paid by Jitka Hosprová.

“Close to the front rank of interpreters…Hos­prova's playing has a nimbleness and lightness of tone, yet with plenty of ‚body‘, that is very attractive. Her account of Op. 11 No. 4 is very fine indeed, keeping the lyrical and the excitable elements in perfect balance.“
Gramophone, October 2014