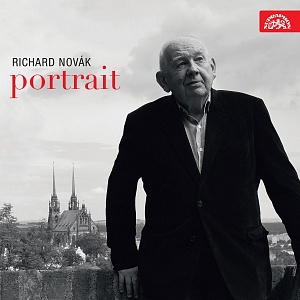 Backed up by the Czech Philharmonic, the 85-year-old Richard Novák sings the part of the Forester from the Cunning Little Vixen in a way that leaves you gaping in admiration. His performance is a witness not only to his singing skill, but also his life experience. The fact that he was lucky to find great music teachers has combined with persistence and hard work on his part. He was not afraid to interrupt his singing career at its apparent height when he felt his voice was losing inner support, and start anew. In 1961 he won second place in a singing competition in Toulouse (with José van Dame taking the first place) and became a laureate in the competition held in the Dutch city of Hertogenbosch in 1962. Dvořák, Verdi and Janáček represent the three supporting pillars of his repertoire and at the same time his three major musical loves.

Novák sang as a guest in Teatro Colón, at the Salzburg Festival under Claudio Abbado and also appeared on prestigious stages in Paris, Madrid and Venice. He has collaborated with many outstanding conductors, having sung oratorios under Ančerl and Neumann and recorded the Glagolitic Mass with both Mackerras and Chailly. One must not forget to mention his beloved song repertoire including works by Schubert, Schumann, Wolf, Křička, and, first and foremost, Dvořák's Biblical Songs. The double CD featuring a selection of Novák's recordings with Supraphon and the Czech Radio is meant as homage to the admirable singer and personality on the occasion of his life anniversary. In light of his excellent condition, however, it seems somewhat premature to congratulate him on his life-time achievement.

A Portrait of an Artist Who Found His Own Path