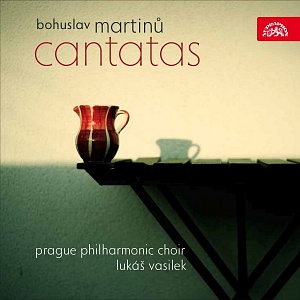 iTunes
Spotify
Deezer
Catalogue Number: SU 4198-2
Published: 21st October 2016
Genre: Vocal
Format: 1 CD
This album has received following awards:
When Miloslav Bureš sent his first poem Song of the Ruby Spring to Bohuslav Martinů in 1955, he seemed to have touched the deepest spot of the composer's heart. The poet set his verses into the landscape of the Czech Highlands, the region of Martinů's childhood and a rich source of his memories. The composer must have identified strongly with the character of the pilgrim returning to his birthplace, because he wrote The Opening of the Springs within nine days. Later he set to music three more poems by Bureš, finishing the last one, Mikeš of the Mountains, half a year before his death. For Martinů, the cantatas represented an important link to his homeland at a time when the political situation and later also his poor health were diminishing his hopes of coming back home. One can only imagine what he felt when he was sitting in Schönenberg, Switzerland, listening to the vinyl record with the first recording of his Opening of the Springs published by Supraphon, or when his friends were sending him reports about the Czech premieres of his works... This new recording made by the Prague Philharmonic Choir is based on the currently prepared critical edition that takes into account the composer's manuscripts and interpretation requirements. Insisting on the highest performance quality and returning to Martinů's original ideas were what motivated the musicians throughout the making of this recording.

Cantatas from the Czech Highlands: Bohuslav Martinů Returning to his Homeland

“The Prague choir gets the balance right: vivid character and resonant voices but never saccharine and rhythmically taut. This is the ensemble that premiered three of the cantatas (in a previous guise) and it’s hard to imagine singing of more authority in Martinů’s music.”
The Guardian, 15th December 2016

“This is a singularly exotic issue for Czechs and non-Czechs alike…I cannot imagine these cantatas being better performed or recorded than here; Lukáš Vasilek is an outstanding conductor, and the Prague Philharmonic Choir respond to his every interpretative intuition. Very highly recommended.”
Gramophone, March 2017

“Baritone Jirí Brückler is superb here, and the top-quality professional Prague Philharmonic Choir master the most harmonically rich cantata of the four, a tale of a girl who doesn’t recognise her long-lost love returning from the wars…valuable messages for our or indeed any time, and superlatively performed. Unmissable.”
BBC Music Magazine, March 2017

“Led by Lukáš Vasilek, the performances of the cantatas on this disc are sung by the Pražský filharmonický sbor with fervor that illuminates Martinů’s music, bringing to each phrase an unwavering commitment to musical accuracy and textual clarity. Like much Czech music, Martinů’s cantatas are shaped by the cadences of language, and the choristers’ superb diction allows even attentive listeners with no comprehension of Czech to follow the narrative progress of each cantata. That Vasilek understands and appreciates these pieces is evident in every moment of these performances, his confident handling of music that is most difficult when it seems most simple disclosing an absolute comprehension of the composer’s word settings. Receiving from Supraphon the gift of sound that reproduces the singular acoustics of Prague’s Rudolfinum with tremendous fidelity, chorus and conductor seize this opportunity to share these treasures of their shared cultural heritage. Their efforts produce performances that, once heard, become adopted components of the listener’s own cultural identity.”
Voix des Arts, 1st September 2017