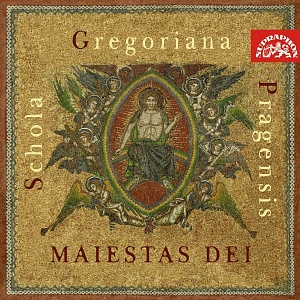 iTunes
Spotify
Deezer
Catalogue Number: SU 3807-2
Published: 29th March 2005
Genre: Vocal - Religious
Format: 1 CD
This album has received following awards:
- This new recording by Schola Gregoriana Pragensis titled Maiestas Dei
presents the medieval polyphony of the composer Petrus Wilhelmi de Grudencz (from
the first half of the 15th century). - It is divided into sections: The Majesty of God; The Birth of God; Mary, Queen and Help; Saints Before the Majesty of God - Saint Barbora, Saint Martin. - The fate of Petrus Wilhelmi de Grudencz, one of the most significant composers of the 15th century, wasn't uncovered by musicological research until the 1970's, when the noteworthy detective story of his life and works began to unfold. - It is only a slight exaggeration to characterize Petrus Wilhelmi as "a composer whose
feet were in the Middle Ages, but whose head was already in the Renaissance." Grudencz was a personality of the dawn of a new era. - This new recording by Schola Gregoriana presents not only works that are practically unknown, but a deep artistic experience as well.