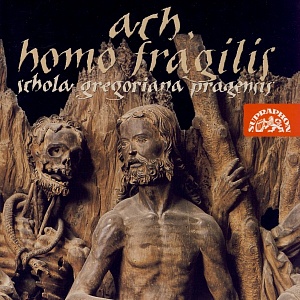 iTunes
Spotify
Deezer
Catalogue Number: SU 3623-2
Published: 16th September 2002
Genre: Vocal - Religious
Format: 1 CD
This album has received following awards:
Roughly from the end of the 14th century, Bohemia witnessed the emergence of song-like genres characterized by the use of poetic language, referred to collectively as lais. Some of them were strophic, similar in that respect to hymns (Ach homo fragilis; Ave spes et salus), while others featured predominantly long "rhapsodic" phrases which were based very loosely on the traditional choral melodics. Apart from turning to God with prayers for salvation and forgiveness, the lais were often addressed to the Virgin Mary whose cult was in the late Middle Ages virtually flourished. This constellation also lay at the core of the programming of this latest recording project of the Schola Gregoriana Pragensis for Supraphon: the introductory part, centered around the theme of repentance, is followed by chants devoted to the Virgin Mary as the principal intercessor for the cause of mankind suffering from sin. The return to penitence in the third part of the programme does not convey a message of pessimism, but rather one of the awareness of humanity's ceaseless struggle with its own frailty.
This recording won the award Choc du Monde de la Musique - Le Monde de la Musique in March 2003